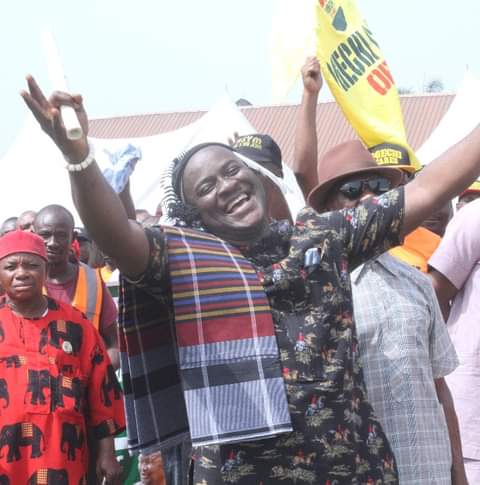 The Member Representing Umuahia South State Constituency in the Abia State House of Assembly, Hon. Barr. Jerry Uzosike has said that he has committed huge resources to make sure the Umunwanwa erosion site does not get so bad before intervention from the Federal Government and other donor agencies.

Uzosike who put some records straight while briefing newsmen in Umuahia on his level of commitment towards arresting the menace, informed that he had drew the attention of the Senator representing Abia Central District, Chief Theodore Orji to the gully erosion site and also handed pictures of the site to him while the Senator has also added his voice to the pitiable condition of the gully erosion site at the National Assembly.

He said they advised him that to make proper case for his community, the erosion site must be captured in their database, stressing that on return, he engaged the service of Rhino Maritime Services and Construction Ltd in 21st September, 1999, based in Port Harcourt who designed the Umunwanwa erosion project and handed it over to him.

Hon. Uzosike stated that after the design, he flew to Abuja to submit the design at Ecological Office at Abuja, maintaining that anyone who says he hasn’t done enough concerning Umunwanwa erosion projector is lying, pointing out that currently, the erosion site has been captured.

He said he has also contributed the sum of N1m to expedite action on the site as agreed by sons and daughters from the area, reiterating that he has committed huge resources to make sure the Umunwanwa project does not get so bad before intervention from the Federal Government and other donor agencies.

The lawmaker however said he was elected by the people with greater responsibility to represent their interests where necessary and that there was never a time he promised during his campaigns to fix the Umunwanwa gully erosion site- a multimillion naira project, as according to him, he is not a Governor or President, rather, a lawmaker with a view to carrying out his oversight function(s) to the best of his abilities.

He disclosed that he has always been in the media, talking about Umunwanwa road, Umunwanwa gully erosion, the devastating erosion at Olokoro bridge, Mgbarakuma-Ubakala road as well as sponsored motions at the floor of the House and appealed to his constituents to continue to exercise hope of a better tomorrow as help is around the corner to ameliorate their sufferings.

He said he did his first project which was a four class room block in Ehume Community, which made a traditional ruler in consent of the villagers conferred a High Chief title of Ogbuhere Uzo 1 of Ehume.

Speaking during the event at Quaebo Primary School, Umuajata, Olokoro in Umuahia South LGA of Abia State, which saw the lawmaker officially hand over a Bungalow he built for an indigent widow, Mrs Chinwe Anyaso, which also featured the empowerment of some people with generating sets and deep freezer and bags of 25kg rice, the President General of Olokoro Development Union, Dike Nzenwa acknowledged the dividends of democracy under the sponsorship of Hon Jerry Uzosike.

Nzenwa expressed happiness to Jerry Uzosike for building the modern edifice for the widow, noting that bungalow donated to Mrs Chinwe Anyaso and presentation of rice as well as refrigerators speaks volume of his love for his people.

In his remarks, the Deputy Governor, Sir. Ude Oko Chukwu commended Hon. Uzosike for living up to expectations of his constituents through purposeful representations in areas of law making and provision of basic amenities.

He noted Hon. Uzosike has sponsored motions and laws that have made positive impact on his people and lauded the traditional rulers for appreciating the impact their son, Hon  Uzosike is making in the house of Assembly, Umuahia South by honouring him with Chieftaincy title and urged him to sustain the trust reposed in him.