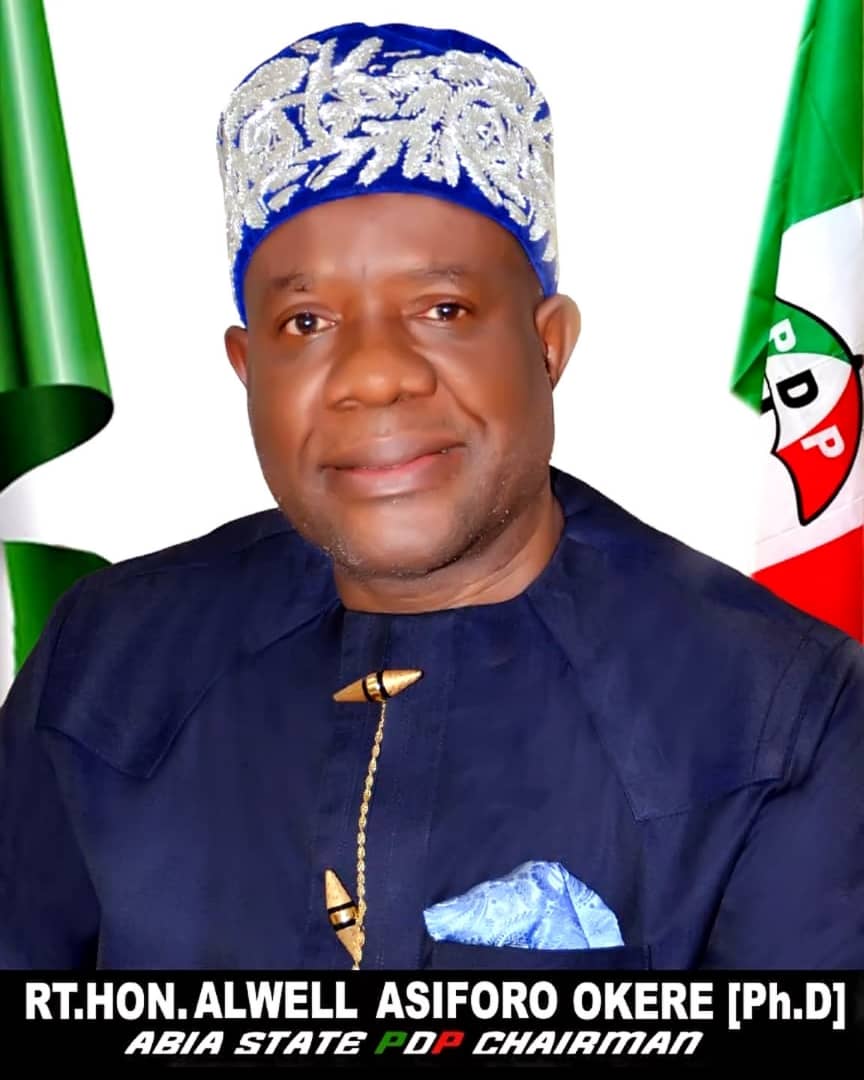 “You Have Championed Policies Towards The Progress Of The Good People Of Abia”, Hon. Nkole, Others Eulogize PDP Chairman @57

The member representing Arochukwu/Ohafia Federal Constituency; Rt. Hon. Uko Nkole has lauded, the PDP Abia State chapter Chairman, Rt. Hon. Asiforo Okere for dedicating the greater part of his life to the course of peace, progress and development to his home state of Abia, and by extension, the People’s Democratic Party, PDP.

Nkole who joined the family, friends, well wishers, and the Abia State chapter of the PDP in rejoicing with the quintessential politician as he commemorates his 57th birthday, pointed out that as a one time lawmaker, Rt. Hon. Asiforo championed policies towards the progress of the good people of Ukwa East in particular, and Abia State in general.

Hon. Nkole noted, that the experience, dexterity and diplomatic dispositions towards issues by Rt. Hon. Alwell Asiforo since assumption of office as the state chairman of the Abia State PDP has further repositioned the party towards the part of stability, integrity, and unity. While deepening democracy within the party.

The press release made available to newsmen by his Media Assistant, Prince Udensi, partly read, “As Rt. Hon. Asiforo Okere, today celebrate yet another birthday anniversary, Hon. Nkole prays for long life, happiness, good health and continued grace on the life of the ertshwile parliamentarian in this his new age, and beyond”.

Meanwhile, the State Chapter of the PDP has congratulated the State Party Chairman, Rt.Hon. Alwell Asiforo Okere on his 57th birthday anniversary.

In a statement issued by the State Publicity Secretary of the Party, Chief Fabian Nwankwo and made available to newsmen, stated that Okere as an astute politician, had elevated the profile of PDP in the State and added value to its integrity.

They commended the State Chairman for his contribution to the growth and development of the party and democracy in the State and Nigeria at large.

The State Exco recalled that Rt. Hon Okere has played a significant role in stabilizing the Party in the State since he was elected as the Chairman.

According to the State Working Committee, the State Chairman deserves all the accolades as he has contributed immensely to the development of the Party in the State and has led the party to victory in the recently conducted Local Government election across the State and in the Aba North and South Federal Constituency By-election.

The release reads in parts, “Our very dear pragmatic Chairman,your selfless service to the PDP and the State as the Chairman of the ruling Party in the State and as well as your numerous accomplishments in your personal and public life readily come to mind as you mark your 57th birthday.

“Over the years, you have given yourself to the course of peace, growth and development of our party and our State.

For this singular reason, we owe you an enduring debt of gratitude. “It is with great pleasure that members of the State Working Committee of the Party and the entire members of our great party in Abia, join your family, friends and well-wishers in thanking God Almighty for His continued protection, blessings and provision in your life in the past 57 years.

“On behalf of the State Exco and members of our great Party in the State, we congratulate our State Chairman as he celebrates his 57th birthday today and it is our earnest prayer and that of our members that God in His infinite mercy will continue to bless you with good health, wisdom and many more years in the service of His people and the State”.