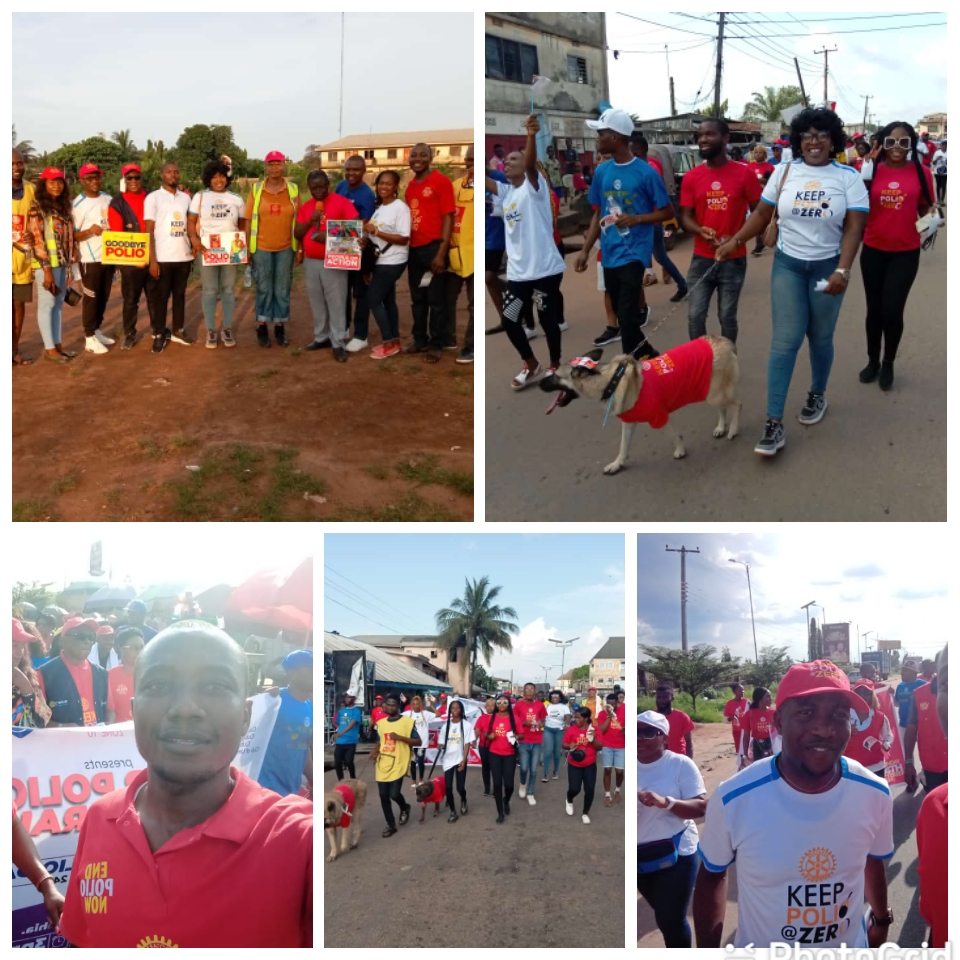 The Visionary President, Rotary Club of Umuahia North, District 9142, Rtn. Emeka Sopuruchi has disclosed that the target of Rotary International was to keep poliomyelitis at a zero level in Umuahia, Abia State, Nigeria, Africa and in the entire world.
This is even as the Rotary Assistant Governor zone 5, District 9142, Rtn. Ekele Ochiabuto has revealed that annually, over 400 million children across the globe receives polio vaccine from the Club.
Speaking during a zero polio advocacy in Umuahia by the Clubs in Umuahia city, Rtn. Emeka Sopuruchi pointed out that all the activities of Rotary is being channeled towards ending polio in the world and the advocacy falls under Disease Prevention and Treatment, one of the areas of focus of Rotary.
Rtn. Emeka further pointed out that the aim and desire of the Club was to ensure that Nigeria, having been certified polio free, do not go back to the old path.
His words, “We want to ensure that we don’t find any other Polio virus affecting any child around us and in Nigeria. Every member of Rotary knows that this is our pet project and we will keep on sensitizing the people to take their children to the nearest primary healthcare centres for immunization”.
He encouraged members to keep  donating to Rotary Foundation and Rotary Plus and keep sensitizing the environs, educating the people about the deadly virus, as according to him, “We have to fight it”.
Lending his voice, the Assistant Governor zone 5, District 9142, Rtn. Ekele Ochiabuto disclosed that out of the 125 polio stricken countries from the Year 1985 to 2021, only two countries – Afghanistan and Pakistan are remaining to be certified polio free, courtesy of the dogged efforts of the Rotary Club.
Rtn. Ochiabuto who recalled that Nigeria was certified polio free around August in the year 2020, maintained that it was the Club’s desire to sustain the feat and move all out to get the world rid off poliomyelitis.

“We want to sustain the eradication of polio in Nigeria and Africa, because any case of polio anywhere around the world is a threat to any country, so if we don’t continue to vaccinate our children, there is every possibility that one day, we may have another case of polio.

“So, we are mobilizing efforts, creating awareness to encourage people to vaccinate their children.

He expressed optimism that through aggressive sensitization and immunization and with support from people, polio would be eradicated like the virus, Smallpox, then followed by the Corona Virus, COVID-19.