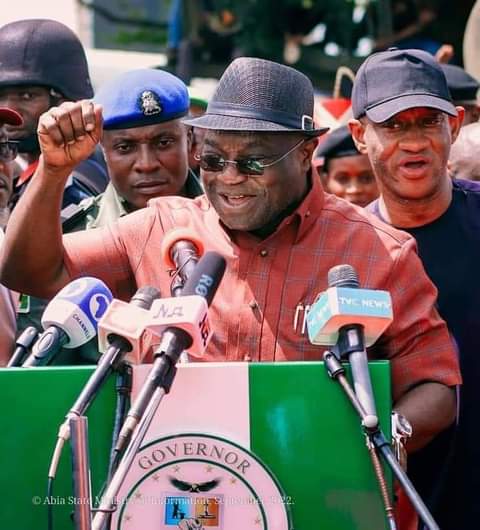 We’ll continue to give robust motivation to our teachers to enhance exemplary performance – Gov. Ikpeazu

Abia State Governor, Dr Okezie Ikpeazu has said that his administration will continue to redouble efforts to see to the welfare of Abia teachers in terms of payment of salaries and other emoluments as well as give robust motivation to them to enhance exemplary performance.

Gov. Ikpeazu asserted that his administration is committed to the implementation of a new retirement age of 65 years or 40 years in service for teachers with effect from December 2022.

He further announced that his administration has equally reviewed the retirement age of University Teachers and assured that this new policy will help to retain “our seasonal teachers and enabled the transmission of knowledge through experience and mentorship of upcoming teachers”.

Gov. Ikpeazu who charged teachers to ensure that Abia State regains and retain its prime position in WASC and other Examinations, described the event’s theme “The Transformation Of Education Begins With Teachers” as very apt and significant, given the strategic and critical roles that teachers play in nation- building and development as well as recognizing the tireless efforts and commitments as basic molders of characters of children who are the nation’s future leaders.

In his address, the Chairman on the occasion and Commissioner for Post Basic Education, Chief Chijioke Mark and his Basic Education Counterpart, Chief Ukwu Rocks Emma said teachers are great people that should be celebrated and reassured that Government recognizing their importance is working assiduously to ensure that problems confronting teachers are tackled in no distant time.

Earlier in his address, the State Chairman of Nigeria Union of Teachers, NUT Chief Dimanochie Uwabunkeonye pointed out that the World Teacher’s Day celebration provide them the opportunity to re-echo their call for teachers to be provided with opportunities and conducive environment for teaching and learning.

He appealed to Government to address the vexing issues of non payment of arrears of salaries, lack of promotions among other incentives to teachers.

In his remarks, the People’s Democratic Party (PDP) Governorship Candidate Prof Uche Ikonne represented by his Deputy, Sir Okey Igwe reiterates that the role of teachers in the society cannot be overemphasized and assured that if duly elected by the electorate as the governor, come 2023, he will continue to make welfare of teachers in the State a priority.

of the State during last year’s Teacher’s Day celebration by the State Governor, Dr Okezie Ikpeazu attracted the presence of top Government officials, Traditional Rulers and stakeholders in the education sector.