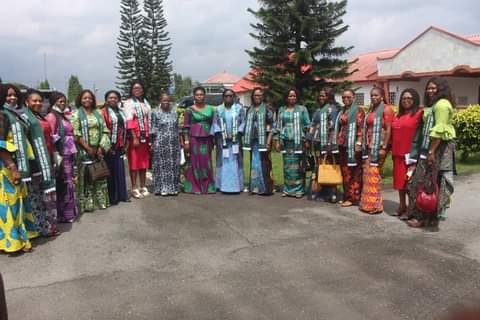 We Are Willing To Offer Support, MOUAUWA Tells Governor’s Wife

Michael Okpara University of Agriculture Umudike Women Association, (MOUAUWA) has said that it is willing to offer support and collaboration to the office of the wife of Abia State governor to better the lives of women and children in the State.

The Association through her President and wife of the Vice-Chancellor, Dr. (Mrs) Nkechi Nkem Iwe made this known when the Executive of the Association paid a courtesy call to  Mrs. Nkechi Ikpeazu at the Government House, Umuahia.

Mrs. Iwe pointed out that her Association’s Ultra-Modern Skills Acquisition Centre will be willing to integrate and train Abia women and girls once the Centre kicks off operations.

She stated that MOUAUWA is an organization that understands the importance of women in the development of the society.

The MOUAUWA President seized the visit to invite the wife of Abia State Governor to her forthcoming uniform launch.

Responding, the wife of the governor and founder, Vicar Hope Foundation, Dr. Mrs Nkechi Ikpeazu maintained that the Association has a double barrel responsibility that entails developing character and learning for the youth.

Encouraging the members to put in their best to ensure the mandate placed upon them is actualized, she reiterated that her office is open to partner with the University on gender related issues.

She further called on the University community to arm the Nigerian youth with relevant information regarding sickle cell anemia and include the teachings of sickle cell in the academic curriculum.

Expressing her pleasure with the good relationship she had with the past MOUAUWA leadership, she promised to partner and collaborate with Dr. Nkechi Iwe-led Executive by accepting  proposals from them that will better the lot of Abia State.

Mrs Ikpeazu also congratulated Prof. Maduebibisi Ofo Iwe on his appointment as the 6th Vice-Chancellor of Michael Okpara University of Agriculture, Umudike and his wife, Dr. Nkechi Iwe for leading a prominent organization such as MOUAUWA.

The event which was attended by the wife of the Deputy Governor of Abia State, Lady Vivien Ude Okochukwu; Special Adviser to the Governor on Primary Health, Princess Uloma Anosike; Acting Permanent Secretary, Abia State Ministry of Women Affairs, Rev. Jane Omereonye, the Executive of MOUAUWA accompanied by the University spokesperson, Adanma Odefa Wachuku and Dr. Ifeoma Onwuka, saw the Association’s President and her Vice, Dr. Nkiru Mbanaso, bestowed the honour of ‘Mother Of MOUAWA’ upon Mrs Ikpeazu.