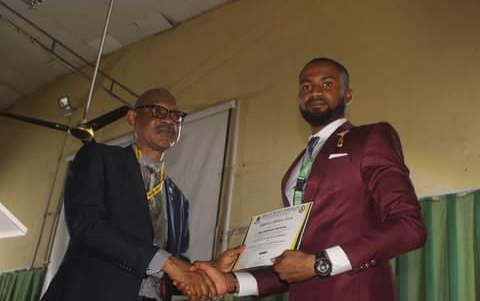 The Vice Chancellor, Michael Okpara University of Agriculture, Umudike, MOUAU, Prof. Maduebibisi Ofo Iwe had stated that his administration would not tolerate any form of immorality or corruption from any arm of the institution including the newly elected Students’ Union Leadership.

Speaking at the Senator Anyim Pius Anyim Auditorium of the University, during the swearing in ceremony of the SUG officials elected in July, 2021, Prof. Iwe maintained that any student owing any SUG dues or levies would pay before being certified as a student or an alumnus of the University.
Speaking further, the MOUAU VC appealed to the newly sworn in SUG officials to be transparent, diligent and law-abiding in the discharge of their duties.

While pledging his support for the new SUG, Prof. Iwe announced that the University shuttle services would commence on Saturday, disclosing that students would only have to pay the sum of N4, 000 to enjoy the services for an academic session.

In his speech shortly after the officials were administered oath of office by His Worship, Emmanuel Etiaba, the new SUG President, Comrade Chukwuma Ogochukwu asserted that his administration would prioritize students’ welfare, adding that he is open to fresh ideas that would foster peace and unity among the students.

He praised the VC for his innovation in introducing electronic voting for the first time in the history of the University, which greatly boosted the integrity of the electioneering process.

Earlier, the out-gone SUG President, Comr. Chinenye Mildred Uchechukwu reeled out the achievements of her administration in a short period of time and thanked the University Management for her support.
Recall that in a press briefing to mark his first 100 days in office, the VC assured students that shuttle services within and outside the campus would commence at the beginning of the 2020/2021 session, following his resolution of a 5-year trade dispute between the University and one of its contractors, Aoen Consults Ltd.

In another development, MOUAU has released the resumption date for the new academic session according to the release above made available to newsmen in Umuahia.