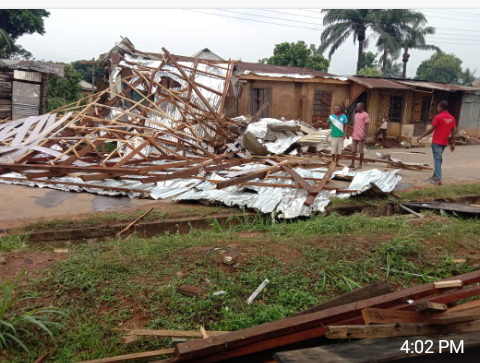 For Mrs Nwoko Cathrine Nkechi, the Headmistress of Okwu Community Primary School in Umuahia South Local Government Education Authority in Abia State, it was a moment of grieve as the most recent rainfall accompanied with windstorm severely affected classroom building.

Narrating the incident to a cross section of Journalists who visited the school, Mrs Nwoko said that a complete block housing two classrooms completely collapsed.

She further revealed that the affected classes have been merged with others pending when actions would be taken on the affected building.

She said that the pupils and teachers were confused about the development.

Speaking also, the Okwu village Chairman, Mr Bartholomew Nwaeze passionately appealed to Abia State government through the relevant agencies to come to their rescue by reconstructing the affected building.

On the steps taken, Mr Nwaeze informed that the village has employed the services of some carpenters who dismantled the pulled roof that blocked the access road.

One of the shop owners within the School environment, Sir Ndubuisi Nwosu thanked God that the windstorm which pulled the classroom block did not harm anyone.