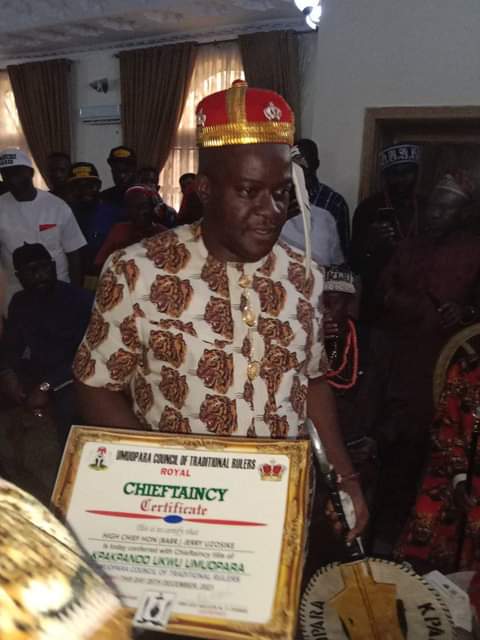 Following his selfless service and contributions towards the development of Umuahia South State Constituency as well his oversight functions and quality representation, Hon. Jerry Uzosike has received showers of chieftaincy titles from the traditional rulers drawn from the three clans that made up the constituency.

Eze Ogbenna who recalled various positive interventions carried out by Chief Uzosike in the Olokoro clan, expressed confidence that the honour would spur him to do more for the people  and equally wished him well in his future political aspirations.

While also conferring the ‘Kpakpando Ukwu Umuopara’ chieftaincy title on Chief Uzosike, during the official inauguration of Ugwu Umuopara Ahia Asaa by Ndi Eze Umuopara/Civic Reception, the Chairman Umuopara Council of Traditional Rulers and the Ohazurume 1of Dim na Opara autonomous community, Ogbodiukwu, Eze Wisdom Ekueku said that the honour was in recognition of Chief Uzosike’s selfless service and contributions towards the development of the areas as well his oversight functions and quality representation.

Eze Ekueku who expressed  joy with the outstanding performance of Chief Uzosike, said that the three Clans in Umuahia South has felt his quality representation and urged him not to relent in his good works.

Responding the Member Representating Umuahia South State Constituency Chief Jerry Uzosike who dedicated the award to Almighty God and the good people of Umuahia South who unanimously gave him their mandate to serve and described the chieftaincy titles and awards as a confirmation of his signatory projects which cut across the constituency.

Chief Uzosike who is also House Committee Chairman on Donor Agencies said that he was proud  to receive the award in recognition of his positive impact in human capital development as he rightly maintained that he has done well and his sterling performance attracted the multiple recognitions.

The State lawmaker further commended the people of Umuahia South for their support and unwavering solidarity so far which he described as unprecedent and assured that he will continue to make them proud.