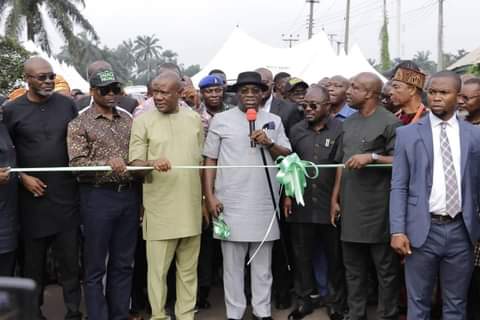 Hon. Nkole who expressed  heartwarming appreciation to the governor on his Facebook page shortly after the event, also lauded Governor Ikpeazu for flagging off the second phase of the same road, adding that the project has indeed added value to the rural farmers.

According to Nkole, “This is part of the efforts made by the state government to-extend infrastructural development to the rural areas largely inhabited by farmers and traders .

“This project has indeed added value to the rural farmers while also improving on travel time and ease of rural accessibility to farms and markets of the agricultural communities and making life more meaningful to commuters on this road corridor in particular and  the entire state in general.

“I am glad to state here that this is about the 154th Road being embarked and commissioned by the Kinetic Governor while others are at various stages of construction”.

Hon. Nkole enjoined all well meaning and genuine stakeholders in the state to continue to pray for the success of the administration of Governor Ikpeazu in the delivery of dividends of democracy to the state.

His words, “In my submission I thanked the Governor for the invitation and equally appreciated His Excellency for all the deliberate efforts in putting Abia State on the steady path of sustainable development while encouraging him to sustain the tempo”.