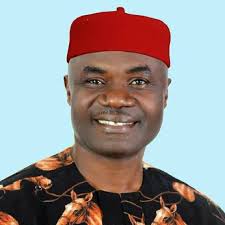 For 12 solid years as a man of good repute adorned with humility and selflessness, Rt Hon Sir Ude Oko Chukwu represented the people of Ohiafia North State Constituency creditably in the Abia State House of Assembly. Out of these number of the years, he presided over the affairs of the 5th Abia State House of Assembly as the Honourable Speaker for 4 years with an enriched working experience in both the public and private sectors.

Rt. Hon. Sir Ude Oko Chukwu also served as the National Vice Chairman, Conference of Speakers (South East Zones) from 2012-2014.
He was equally the Chairman of the Selection Committees of the Honourable House by virtue of his position as the Speaker from June 2011 to May 28, 2015.

Within this period of stewardship, Rt Hon Sir Ude Oko Chukwu, a man divinely embellished with wisdom, recorded outstanding achievements in the Abia Legislature which was then described as the most peaceful, vibrant, united and result-oriented Legislature in the Federal Republic of Nigeria.

As Deputy Governor since 2015, Rt. Hon. Sir Ude Oko Chukwu, willing and ready at all times to join hands with his Boss, Dr. Okezie Victor Ikpeazu to change for the better the face and fortunes of God’s own State and her people, has shown remarkable commitment and support to the achievements of the dynamic and service oriented administration of his boss.

The office of the Deputy Governor under the watch of Sir Ude Oko Chukwu, charged with the responsibility of handling Abia Boundary problems with seven States namely Imo, Enugu, Anambra, Ebonyi, Rivers, Cross Rivers and Akwa Ibom, has left no stone unturned to ensure peaceful co-existence, security of lives and property along the border corridors to reflect the name of the State as God’s own State.