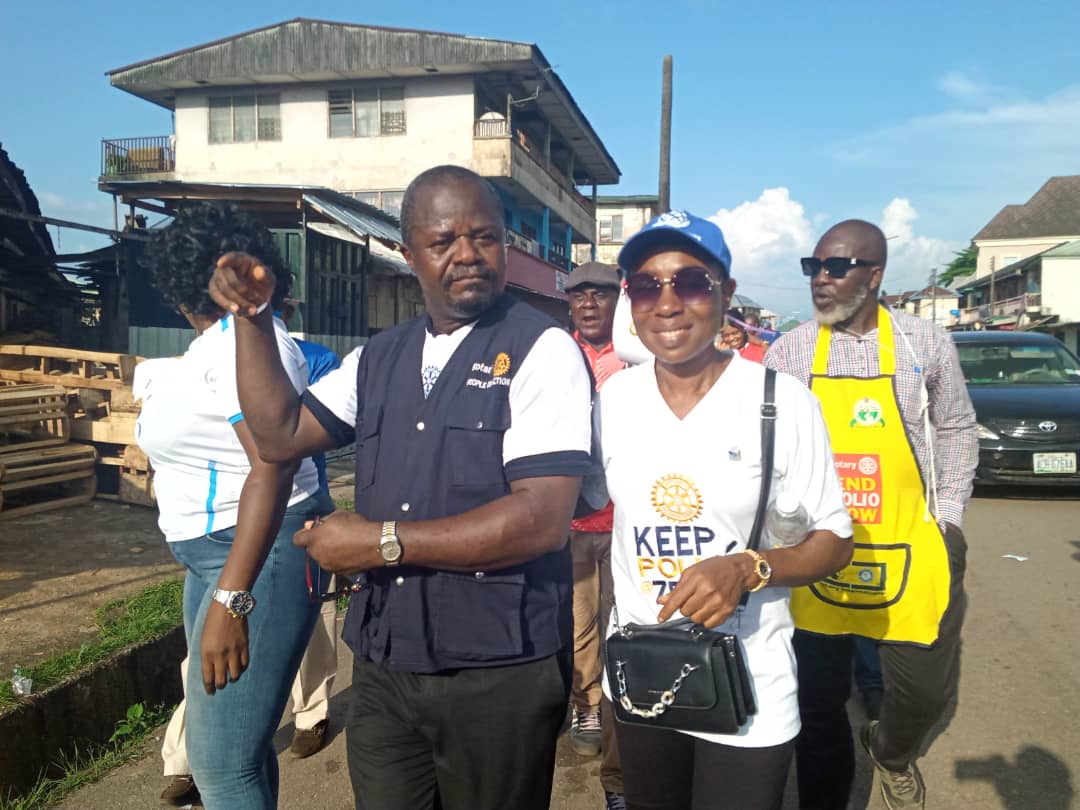 Rotary Club of Umudike Central, District 9142 has called on Abia residents and Nigerians in general to shun vaccine hesitancy and open up their communities for health workers to come in and vaccinate their children against poliomyelitis.

Speaking shortly after a massive sensitisation campaign, which saw Rotarians and Rotaractors in zone 4 and 5 District 9142 tour round the major roads and streets of Umuahia city, educating the residents on poliomyelitis vaccination and eradication, the Visionary President, Rotary Club of Umudike Central, Rtn. Nonye Obinwa reminded the residents that there is no other way to kick polio out and sustain the polio free status, which the country is enjoying presently, other than vaccination.

Rtn. Nonye Obinwa who maintained that, Keeping polio at zero is the business of every Rotarian and Rotaractors, reiterated the readiness and preparedness of Rotary Club of Umudike Central, to carry the message of Rotary International in the fight to keep polio at zero in the world.

Lending his voice, a Past Assistant Governor, Rtn. Njoku Uchechukwu Njoku pointed out that, “Polio is one of the worst diseases that anyone can suffer from”, adding that one of the cardinal interest of Rotary was to ensure that polio is kicked out of not only in Nigeria but the entire world.

Rtn. Njoku vividly recalled that Rotary was the first organization that identified polio as a disease that needed to be stamped out of the surface of the earth and was fighting that course/cause alone until the World Health Organization, eventually joined the fight.

His words, “After that, a lot of other agencies like the Bill and Melinda Gates Foundation, came in to assist Rotary to ensure that this course is achieved.
“We are happy today that for the past two to three years, Nigeria and Africa has been declared and certified polio free, but we are not done yet, we are still telling everybody to vaccinate their children against polio, because in every unvaccinated child out there, there is a big chance for polio to come back to Africa and Nigeria”.

Rtn. Njoku maintained that with the concerted efforts on polio vaccination, Rotarians would continue to move to the remaining countries of Pakistan and Afghanistan to ensure that polio is cleared.