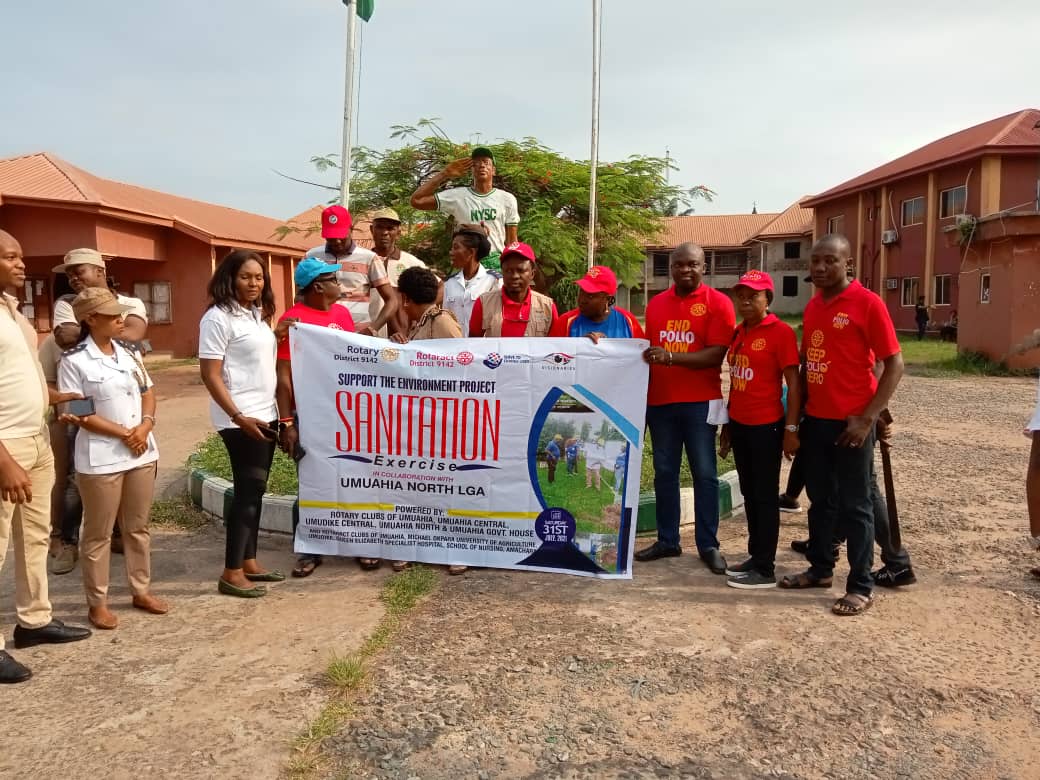 Members of the Rotary Club in the District, teamed up with the Rotaractors to clean the Isi-gate axis of the capital city and cleared towering bushes in Umuahia North Local Government Headquarters.

The Visionary President, Rotary Club of Umuahia North, Rtn. Emeka Sopuruchi in his speech during the exercise called for an aggressive sensitisation campaign on the need for residents to own the exercise and participate actively in the monthly cleanup exercise.

He disclosed that members also carried out a sensitisation on the need for Abians to keep their surroundings clean to avoid diseases and incidents of flood while also keeping safe from the Cholera and coronavirus pandemic.

According to the President, the project was part of the Club’s yearly sanitation exercise to ensure not only a cleaner environment, but also healthier citizenry, and to educate members of the public on how best to keep themselves free from diseases.

Speaking also, the Visionary President, Rotary Club of Umuahia Central, Rtn. Eugene Uhuaba  said the exercise was designed for Rotarians and Rotaractors to contribute their own quota towards keeping the environment clean and as well conserve the environment.

According to Uhuaba, “We are doing our statutory responsibility for the month of July, which is Rotary International Month of Protecting the Environment. The Rotary Clubs of Umuahia agreed as a unit to come together to do this work. We believe in coordination, cooperation and unity, which we expect will yield maximum result”.

In his remarks also, the Visionary President, Rotary Club of Umuahia, Rtn. Ugochukwu Ajawara said the sanitation exercise is part of the community service outreach programme of the Club, whereby people in public places are sensitised on the need to clean their environment to prevent possible outbreak of diseases.

He noted that the sanitation exercise is a demonstration of the importance Rotary Club attaches to the health of the people and in line with the disease prevention and treatment programme of the Club.

According to him, the Cleanup exercise is aimed at educating the residents on the need to sanitise their environment, adding that malaria and other diseases are preventable if only residents can cover their food, wash hands before touching food, avoid keeping stagnant water around the surrounding and general sanitation exercise.

Interacting with a cross section of Journalists, the Service Project Chair, Rotary Club of Umuahia North, Rtn. Michael Ibegbulam disclosed that the exercise saw the Rotarians and Rotaractors evacuate tons of waste from drains and refuse heaps in the roads and streets around the Isi-gate axis.