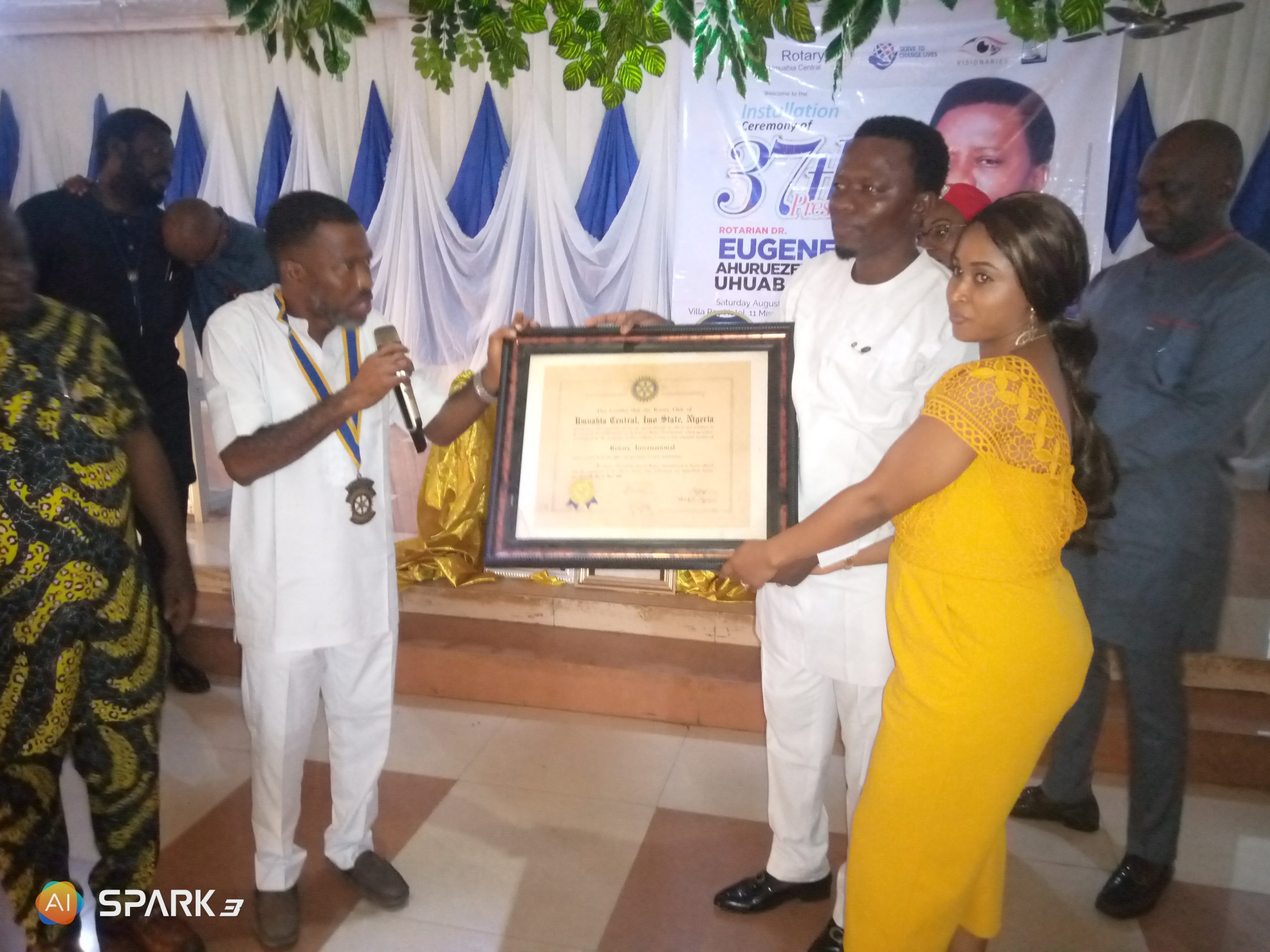 The 37th Visionary President of Rotary Club of Umuahia Central, District 9142 Rtn. Eugene Uhuaba has said that his administration will focus on fighting diseases and growing local economies.

In an address, shortly after his installation as the 37th President of the Club in Umuahia, the Abia State capital, Rtn. Uhuaba, a medical doctor also revealed that his administration will see the promotion of peace, provision of clean water, sanitation and hygiene, protection of the environment, saving mothers and children and supporting education as part of its priorities.

He disclosed that within two months of assumption of office (Rotary year runs from July to June), his administration has completed seven outstanding projects.
The projects according to him include, Environmental protection campaigns; quarterly sanitation exercise and campaigns, female education programme in selected secondary schools in Abia State; school health programmes in selected secondary schools among others.

His words, “In this Visionary year, Rotary’s vision statement: Together we see a world where people unite and take action to create lasting change across the globe, in our Communities and in ourselves, will be our watchword and our minimum benchmark is excellence in service since perfection is unattainable.

“We will leverage on the gains of the Pathfinder year and promote excellence in delivery on Rotary’s areas of focus”.

Earlier in his valedictory speech, the Immediate Past Pathfinder President of the Club, Rtn. Sunny Megwara went down memory lane to recall the challenges faced by his administration which included the ugly visit of the novel, Corona Virus, COVID-19 and how successfully, his team sailed through.

Rtn. Megwara said, “Our efforts did not go unnoticed as the Club was bestowed with a Pathfinder Legacy Award by District 9142 for being one of the Clubs that grew membership, contributed immensely to Rotary Foundation and won the Rotary International Citation.

He expressed optimism that Rtn. Uhuaba led administration will lead the Club to the next enviable height.

Also in his remarks, the Assistant Governor, Zone 5, District 9142 Rtn. Ekele Ochiabuto pointed out that Rotary Club of Umuahia Central is in for greatness, as Rtn. Uhuaba led administration is set to deliver effectively and efficiently.

“I have personally followed him over some time now, and I can only attest to his compact personality and impeccable leadership qualities. His first month as the leader of this great Club has been hugely eventful and successful. His disposition and passion for the new generation and Youth service has been top notch.

“Little wonder he has been able to revive and resuscitate Rotaract Club of School of Nursing and Midwifery, Amachara and Rotary Club of Queen Elizabeth Specialist Hospital within this short period”.

Meanwhile, a tween, Master Ochoiheoma Mishael Megwara was honoured as the youngest “One Star” Paul Harris Fellow and subsequently decorated  with a PHF pin by the Visionary President of Rotary Club of Umuahia Central, Rtn. Eugene Uhuaba.