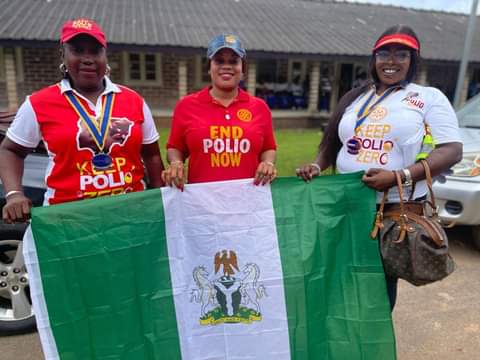 Every year on 24 October, the World Health Organization, Rotary International among others observe World Polio Day to raise awareness of the importance of polio vaccination to protect every child from this devastating disease, and to celebrate the many parents, professionals and volunteers whose contributions make polio eradication achievable.

Making her feelings known to our correspondent in Umuahia, Abia State, the District Governor, Rotary International District 9142, Rotarian Grace Okaro stated that Rotary’s fight against Polio dates back to 1979, when polio recorded a successful immunization of 6 million children in the Phillipines.

According to her, since then, a total of 122 countries have had Polio eradicated from their areas through the efforts of Rotary and its partners.

She said that Partners and stakeholders in the Polio Eradication Initiative have collectively identified remaining obstacles to polio eradication, in order to inform a revised and strengthened plan.

The District Governor disclosed that for Rotary members of Rotary International District 9142, Nigeria, the 2022 World Polio Day celebrations started since the beginning of the month of October with Clubs engaging in various activities to create awareness on the need for the continued immunization of our infants and fundraising to support the Polio Eradication Initiative.

She revealed that the District also hosted a Polio Plus Seminar and sensitized the citizenry through a Road Show over the weekend in Abakaliki, Ebonyi State.

“Rotary Members across the seven states that make up District 9142, converged in International Conference Centre Abakaliki, Ebonyi State, for the 2022 Polio Plus Seminar and other activities in preparation for the World Polio Day on the 24th of October, 2022”, she added.

Okaro therefore renewed call for team-work amongst the Clubs in the district to sustain the fight against Polio, adding, “To achieve this, Clubs should endeavour to be all-giving to the Polio Fund”.

Speaking also, the Synergizer President of Rotary Club of Umuahia, Rtn. Adaeze Iroegbu vividly recalled that before the intervention of Rotary International, the case of poliomyelitis was unimaginable, hitting the unsuspecting children.

“But through the support of the vaccine provided by Rotary International in collaboration with its partners, today, you barely hear much about polio and in Nigeria, we are keeping polio at zero”, Rtn. Iroegbu said.

She disclosed the plans of the Club to not only vaccinate zero (0) to 5 years old children at Amuzukwu Primary Healthcare centre, Umuahia but to also during the campaign, present gift items to the children and their mothers.

Speaking respectively, the Synergizer Presidents of Rotary Club of Umudike Central, Rtn. Vivian Anyaegbu and Rtn. Geraldine Onuorah, Rotary Club of Umuahia North, encouraged parents and caregivers to ensure that they get their children vaccinated against the dreaded disease that causes paralysis in children.

The theme for this year, “World Polio Day 2022 and Beyond: A healthier future for mothers and children”, kicked off with discussions in Geneva between WHO, Rotary International and polio experts, to consider future efforts to continue the decades-long collaboration against polio.