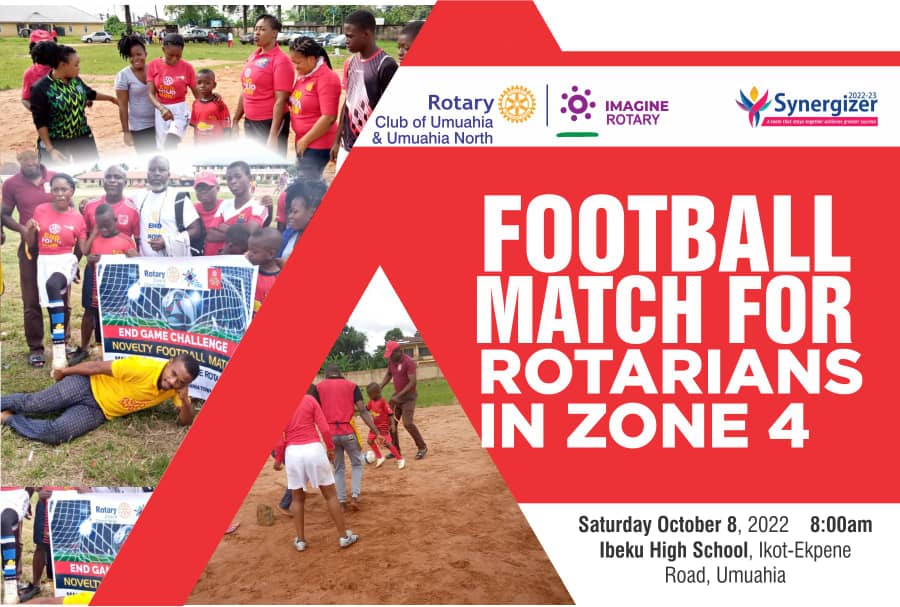 Rotarians kicks out Poliomyelitis in Umuahia

Rotary Clubs of Umuahia and Umuahia North, at the weekend battled to a draw in a novelty football match to kickstart activities to mark the 2022 World Polio Day  with the theme: A healthier future for mothers and children”.

For Rotarians across the globe, October 24th is being set aside to raise awareness on the crippling but preventable disease-Poliomyelitis.

Speaking at Ibeku High School playground, Umuahia, Abia State during the event, the Assistant Governor zone 4, Rtn. Sunny Megwara noted that the novelty match was part of efforts of Clubs in the zone to sensitize people on the need to sustain the successes recorded in the fight against poliomyelitis.

According to him, “Rotary has been in the forefront of kicking polio out  from the surface of the earth and Rotary is one hundred percent committed to that task and that is also why we use this occasion to raise funds for this critical task”.

While disclosing the steps taken by the Clubs in the zone to create awareness on the need to sustain the zero status of polio in Nigeria, the Synergizer Presidents of Rotary Club of Umuahia, Rtn. Adaeze Iroegbu and Umuahia North, Rtn. Geraldine Onuorah said that the intention of Rotary is to have a zero polio status world and the Club cannot rest until polio is wiped out of the world.

They assured that Rotarians are still neck-deep in the fight against polio to ensure that the  two remaining countries; Pakistan and Afghanistan are certified polio free.

They described the football match as part of the campaign aimed at sustaining the successes and keep people aware of the pains of poliomyelitis.

Speaking also, District 9142  Secretary, Rtn. Ekele Ochiabuto reminded Nigerians that there is no cure for poliomyelitis but there exist a safe and effective vaccine, the one which Rotary and her partners have been using to immunize over 2.5 billion children worldwide.

He disclosed that it is Rotary International’s goal to eradicate Polio not only in Nigeria but, “from our world entirely”.

Interacting with our correspondent, a Past Assistant Rotary Public Image, Rtn. Onyinye Ralph-Nwachukwu who exposed and expounded ways and means Rotary International raise funds for polio, disclosed further that  Rotary and Rotarian has contributed billions of dollars and also countless volunteer hours to protect children around the world.

She appreciated the Rotary Clubs of Umuahia and Umuahia North for putting out together the novelty football match which was designed to raise funds and also to raise awareness on the top priority of Rotary International, which is elimination of polio from the face of the earth.

Flagging off the exercise earlier, the Abia State Commissioner for Sports, Chief Karibe Ojigwe who kicked the first shot, appreciated the efforts of Rotarians in championing the cause and course of humanity and for promoting physical fitness, peaceful coexistence, among other positives through the novelty football match.

Recall that Rotary Club of Umuahia North had earlier had a “Keep polio at zero fellowship”, where the lead speaker, Rtn. Michael Ibegbulam spoke on the “Essence of donating to the Rotary Foundation polio eradication”.

Polio eradication has been Rotary’s external priority since 1985, with more than $1.2 billion contributed to the effort.