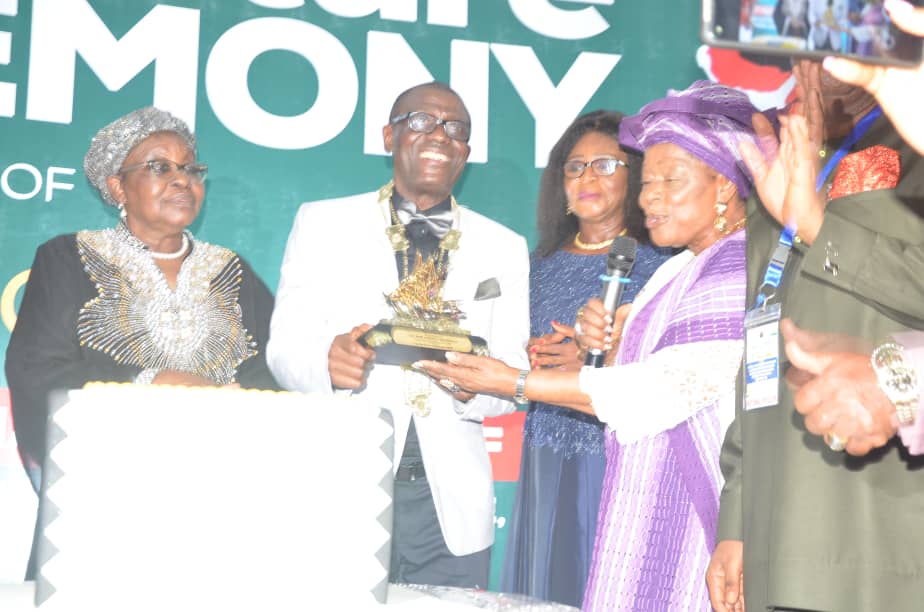 Abia State Governor, Dr. Okezie Ikpeazu has revealed his led administration sponsored the first batch of 30 youths to China for a one year shoe making apprenticeship to further build capacity for the MSMEs as the key economic and sustainable development drivers and job creation.

Ikpeazu who stated this at the 2021 Annual General Meeting ( AGM) and the investiture of Ide John C. Udeagbala as the 21st President of Nigeria Association of Chamber of Commerce, Industry,Mines and Agriculture ( NACCIMA) held at Aba Sports Club, Aba, revealed that the efforts of his administration since 2015 have continued to yield fruits through the SMEs as Abia entrepreneurs have consistently won laurels for the State, the latest Award and Excellence in Leather Works to Aba based Footwear Academy at the National MSME Award held at Abuja.

his Government is leaving no Stone unturned in it’s effort to achieve her flagship project- the Enyimba Economic City which when completed will provide over seven hundred ( 700) jobs in ten years.

Ikpeazu who stated this at the 2021 Annual General Meeting ( AGM) and the investiture of Ide John C. Udeagbala as the 21st President of Nigeria Association of Chamber of Commerce, Industry,Mines and Agriculture ( NACCIMA) held at Aba Sports Club,Aba, further stated the Government is fully committed to reposition and reengineer the Abia economy in line with international best practices to enable her meet the expectation of the people of the State.

The Governor represented by his Deputy, Sir. Ude Oko Chukwu said that it will not relent in it’s determination and commitment to ensure wide spread provision of basic socio – economic infrastructure that will bring comfort and good living standard for the citizenry.

The state governor said that he is committed and determined to exploring every ingenuity to ensure that her resources are efficiently and effectively harnessed and deployed to upgrade the facilities in all parts of the state as well enunciated it’s five cardinal policy pillars of Agriculture Education,Commerce/ Industry ( Trade and Investment), Health, Oil and Gas with their institutional and infrastructural enablers.

Dr,. Ikpeazu further stated that as Aba remains the centre of entrepreneurial excellence with great potentials for exploitation and harnessing the develop of the commercial city of Aba.

According to him”. This administration has gone to great lengths to tackle the infrastructural decay and other deficits in Aba to ease movement of goods and services and increase turnover of our entrepreneurs while partnering with Development Organizations and Lending Institutions to provide access to funds to our people.

” This administration has sponsored 29 shoe and Allied Leather Products manufacturers including some members of ( ACCIMA) Aba and ( UCCIMA) Umuahia on Trade Mission to Turkey and USA.
Furthermore, the Government sponsored 40 youths to Port- Novo , Republic of Benin to understudy and acquire Modern Agricultural Skills for the improvement and enhancement of our Agricultural productions with particular emphasis on Oil Palm proliferation, Cocoa Production, Cassava and Rice production among others.

Dr. Ikpeazu described this year theme ” The Role of the Organised Private Sector( OPS) In Achieving A Sustainable Economic Growth.- A Focus On Trading Under African Continental Free Trade Agreent( AFCFTA) is apt and would not have come at a better time than now as it among other things captures the Abia people’s goal for unity of purpose on the development efforts in the state.

He congratulated the 21st NACCIMA President and his team to diligently justify the confident reposed in them.