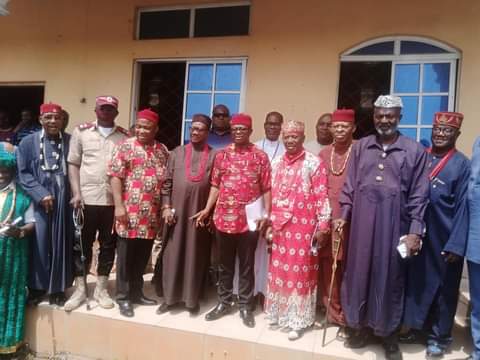 To ensure that the contractors handling the Umuahia-Ikot Ekpene federal road have an unimpeded access to the road as they resume work, the Minister of works, Mr. Babatunde Fashola has directed steps towards the removal of crops and building that are within the Right of Way, ROW.

The member representing Ikwuano/ Umuahia Federal Constituency, Chief Sam Onuigbo made this known during the stakeholders’ meeting on the reconstruction of Umuahia-Ikot Ekpene federal road second phase, held in Umudike in Ikwuano L.G.A, of Abia State.

Chief Onuigbo who passionately appealed to his constituents to cooperate with the contractors, said that the cooperation would enable the contractors to deliver quality roads as well as ensure smooth access for them in the discharge of their duties.

Onuigbo who reminded the constituents that the Umuahia-Ikot Ekpene federal road remains a burden they have collectively borne, disclosed that in all his years at the National Assembly that he had at no point lost sight of the need to fix the road, neither has he ever stopped working hard to realize his dream of fixing it.

Chief Onuigbo recalled that the road was in a terrible condition before he was elected but explained that worst portions like Okwe Oboro was fixed in December 2016, even as total  reconstruction contract awarded by in 2019 was slowed down by  “inadequate release of funds by the federal government.”

Onuigbo who also went down memory lane to recall his efforts to draw the Federal Government’s attention to the fixing of the road, dated May 26, 2016 and appreciated respectively President Muhammadu Buhari, Babatunde Fashola for including the important road among those to be funded with money from Nigerian National Petroleum Corporation (NNPC) vote; and the constituents for showing unwavering faith in him.

Specifically, the President General of Oboro Clan Welfare Association, OCWA Chief Matthew Ifenkwe urged the contractors to have a standard and be consistent with it from the beginning of the work to its completion.

Let me begin by thanking all of you for making out time to be here today. We are all equal stakeholders on the issue of the Umuahia-Ikwuano-Ikot Ekpene federal road.

3. The first step I took was to move a motion on Thursday, May 26, 2016, calling for urgent attention on the road. I followed this up by seeking for and having a meeting with the then Honourable Minister of Power, Works and Housing, His Excellency Babatunde Raji Fashola SAN, on Tuesday, June 14, 2016. At that meeting, I presented the Honourable Minister with pictorial evidence of the sad and deplorable state of the road and made two requests: that the Minister directs the Federal Roads Maintenance Agency (FERMA), to carry out a palliative work on the failed sections of the road; and secondly that action is taken to end the annual ritual of carrying out palliative works on the road, by effecting a total reconstruction of the road. In a letter dated June 15, 2016, and signed by the Coordinating Director of Highways, Engineer Bala Danshehu on behalf of the Honourable Minister, the Minister affirmed his commitment to ensuring that first, palliative works are carried out on the failed sections of the road, and then to ensure that total reconstruction is carried out.

4. On December 16, 2016, we carried out the flag-off of the palliative works on the road, at Okwe Oboro, in Ikwuano Local Government Area, and by April of 2017, the formerly impassable sections of the road had been fixed.

5. Still, I followed through with letters and engagements with the Minister and his office, reminding him of the second part of his promise until the road was awarded for reconstruction in May 2019.

6. I am aware that even though the contractors, Messrs. Hartland Nigeria Limited and Raycon & Company Nigeria Limited, mobilized to site during the last quarter of 2019, the pace of work was very slow due to the inadequate release of funds by the Federal Government. As your representative, I had continued to push for increase in funding during every budget cycle with relative success. But, with paucity of funds a major challenge, I knew it was important to begin to find alternative means of funding if we are to realize our objective of tackling once and for all the deplorable state of the road.

7.  As it was increasingly becoming obvious that the contractors have been handicapped by paucity of funds, I sustained my pressure to convince the Minister on the need to find alternative sources of funding for the road including finding a way to include it as a Sukuk project. On September 27, 2021, I again sent a reminder to him asking that an alternative means of funding the reconstruction of the road be explored as a matter of urgency. Thankfully, on October 27, 2021, the Federal Government approved the provision of alternative means of funding for the road, under the Nigerian National Petroleum Corporation (NNPC) Road Tax Credit Scheme. This move has shone a huge light on the possibility of finally reconstructing this all-important road and has raised our hopes tremendously. For this, I am profoundly grateful to President Muhammadu Buhari GCFR and his administration and the Honourable Minister for making this possible. I am not only thankful to President Buhari’s administration, but also to the totality of my constituents who have shown their unwavering faith in me, knowing that like them, I too bear the pains of the bad state of the road.

8. As we get ready to welcome the contractors back to site, let me use this medium to communicate to you that the Honourable Minister has written to me, asking me to address you to ensure that efforts are made to remove crops and buildings that are within the Right of Way (RoW) so as to ensure that the contractors have an unimpeded access to the road as they resume work.

9. My dear constituents, and fellow Nigerians, the Umuahia-Ikwuano-Ikot Ekpene federal road is a burden we have collectively borne. At no point in all my years at the National Assembly have I lost sight of the need to fix this road. Neither have I ever stopped working hard to realise this dream. I have determinedly been a constant at the offices of the Federal Ministry of Works and Housing and on more than one occasion, the Honourable Minister has openly commended me both orally and in writing for my tenacity. I wear this shoe and I know where it pains the most. Thankfully, help is finally here. Let us therefore play our parts and ensure that there will be no inhibition to the speedy realization of this dream.

May God bless us all.