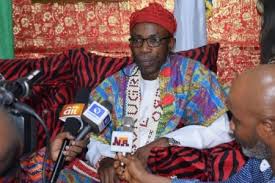 The people of Olokoro clan in Umuahia South L.G.A, of Abia State have been urged to rise and make themselves available in places where critical political decisions are taken in the country.

His Imperial Majesty, Sir Mishak Nnanta, KJW, KSM, JP the Gburugburu Ndi Igbo Dum and a stakeholder in the clan spoke to a cross section of Journalists shortly after Concerned Citizens of Olokoro clan’s meeting at the residence of the Pro chancellor of Federal University of Lokoja, Distinguished Senator Chris Adighije which also saw the group bestowed “Humanitarian Support Award” on Sen. Adighije.

He wondered what had happened to the clan which once paraded giants in the political field of the country.

He vividly recalled that Olokoro clan had produced a Minister of the Federal Republic of Nigeria and National Chairman of the PDP, who is Prince Vincent Ezeogbulafor and Distinguished Senator Chris Adighije in the political circle of Nigeria.

Nnanta, a national patron of Vigilante Group of Nigeria, VGN and Southeast geopolitical zone patron of PCRC also decried what he termed the “Sorry security situation” of Olokoro clan where “Drug addicts, drug peddlers, cultism, and all sorts of criminal elements” seems to have overran the once peaceful and serene clan.
He therefore called on the traditional institutions, Olokoro Clan Development Union, Concerned Citizens of Olokoro Clan and other meaningful groups in the clan to wake up to their assignments and fight the ugly menace to a still.

Nnanta, the President General of Igbo World Union, IWU reminded the traditional rulers of the clan that cleanliness is next to godliness and a sanitized environment is achievable when the royal fathers first clean their homes off immorality and other ills closely associated with some their children.

“The traditional rulers of Olokoro clan should strive to put their respective homes in order and purge their houses to enable them stand boldly in their various Communities and make and take the rightful decisions geared towards reducing insecurity to its barest minimum”, Nnanta advised.

He seized the opportunity to appreciate the State Commissioner of Police, CP Janet Agbede for revamping Police Officers Mess in Umuahia and for fighting insecurity to a still in Abia State, which he described as one of the safest state in the country.