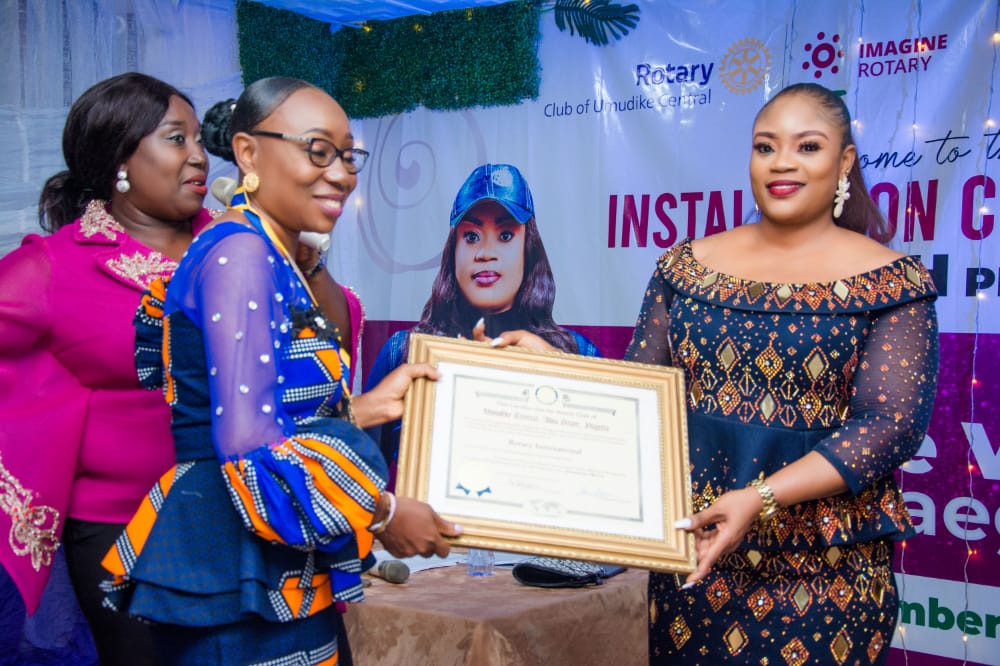 The Synergizer President of Rotary Club of Umudike Central, District 9142 Rotarian Chinwe Vivian Anyaegbu has expressed the preparedness of the Club to carry out prostrate and cervical cancer screening for the people living within the Club’s domain.

In an address in Umuahia, Abia State shortly after she was installed as the 19th President of the Club, Rtn. Anyaegbu also disclosed plans of her led administration to donate delivery kits and consumables to selected Primary Healthcare centres and also donate sanitation and hygiene tools to selected schools in the state.

She said the Club will also embark on the distribution of school desks to selected schools in the state; renovation and equipping of school library for Awom na Ebo Technical Secondary School, Oboro in Ikwuano L.G..A; empowerment and grant to petty traders; donation of sewing machines to indigent persons; erection of bill boards and radio program on peace and conflict prevention; organize a symposium for secondary schools on the promotion of peace and prevention of conflict; tree planting exercise in selected locations and also settle hospital bills for indigent mothers.

“Having been challenged by Rotary International President, Jennifer Jones to imagine Rotary with the possible changes we can make to transform the world”, Rtn. Anyaegbu revealed that the Club carried out need assessment and resolve to key into the Rotary seven areas of focus by striving to achieve the the above listed service projects within the 2022 – 2023 Rotary year.

She passionately appealed to individuals and corporate bodies to identify partner and generously donate towards the actualization of the humanitarian service projects.

2nd from left, the immediate past Visionary President of the Club Rtn. Chinonyerem Obinwa handing over the Club’s Charter Certificate to Rtn. Chinwe Vivian Anyaegbu.

Earlier in a valedictory address, the immediate past Visionary President of the Club, Rtn. Chinonyerem Obinwa who appreciated the Club and immediate family for the support and encouragement given to her led administration, requested members to join hands with the Synergizer President to make a difference through “Our actions”.

In his remarks, the Installation Committee Chairman, Rtn. Njoku Njoku prayed God to grant the Rtn. Anyaegbu and her team the divine wisdom to successfully fulfill the task ahead.

The event featured induction of new members; conferment of awards; launching of service projects and inauguration of Board of Directors.