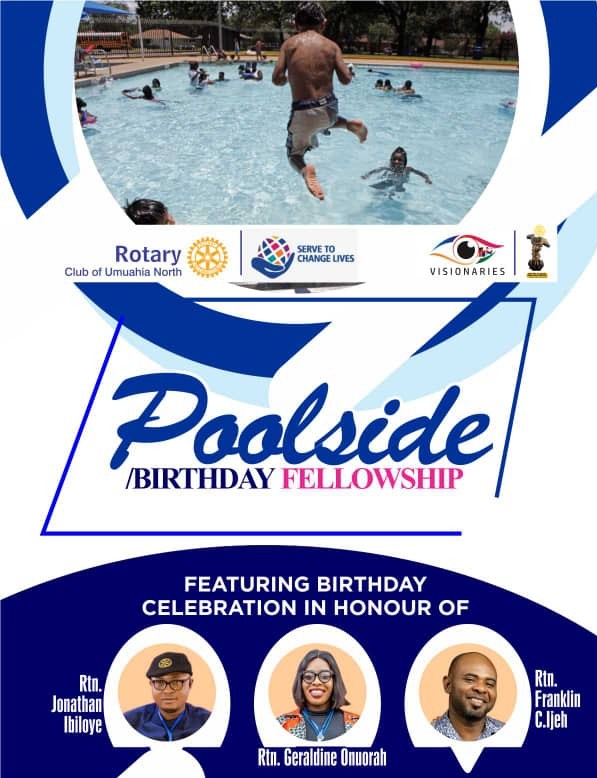 The Visionary President, Rotary Club of Umuahia North District 9142, Rtn. Emeka Sopuruchi has said that occasions like birthday celebrations are good for human psychological well being.

In his speech in Umuahia, Abia State during the poolside/birthday fellowship in honour of some of the members of the Club, Rtn. Sopuruchi said bcause of the general human condition of despair, hopelessness, and uncertainties that have bedeviled the country, birthday celebrations remained one of the keys needed to bring back troubled souls.

Sopuruchi who also said that birthday is a good opportunity to bond with people, family and friends, pointed out that celebrating a member’s birthday is important because “It shows the person you are thinking of them and in turn, they feel valued”.

According to him, “Wishing a Rotarian a happy birthday is an easy way to create a positive experience between you and the Chief Celebrant. It also helps to build not only the celebrant’s reputation but that of the Rotary Club of Umuahia North too”.

In their respective speeches, the Assistant Governor zone 5, District 9142, AG Ekele Ochiabuto, the charter president of the Club, Rtn. Okechukwu Onugu and the best citation award winning president and past president of the Club, Rtn. Odigbo Ezekwem congratulated the celebrants and lauded Rtn. Emeka Sopuruchi for celebrating members’ birthday anniversaries on every last Wednesdays of the month in a very convivial and conducive environment, even as they joined the Visionary President on the call to donate to the Rotary foundation.

The birthday celebration was in honour of the President-elect of the Club, Rtn. Geraldine Onuorah ; Rtn. Jonathan Ibiloye and Rtn. Chibuzo Ijeh.