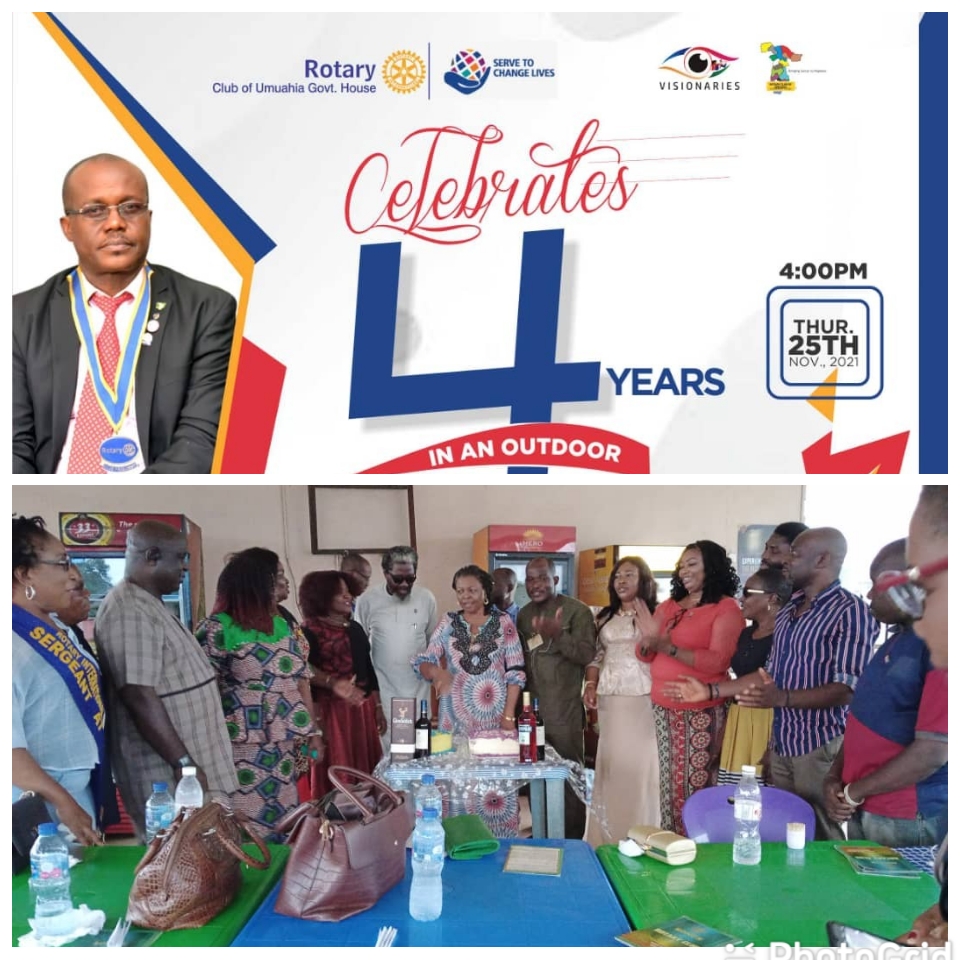 The atmosphere was quite convivial, a magnificent evening garnished/embellished with merriments and good company, as members of Rotary Club of Umuahia Government House, District 9142, Thursday, celebrated their four years of existence in an outdoor fellowship at Abia Hotels, Umuahia, Abia State.
It’s been four years now since the Club was chartered – November 12, 2018. Four years of ‘counter-pressing’ and also four years of turning doubters into believers, at least for the most part, as the Visionary President of the Club, Rtn. Emeka Wachuku worked to put the Club progressing into the second quarter of the 2021/2022 Rotary Year.

A cross section of members who spoke to TCNEWS, who include the Special Adviser to the Abia State Governor on Health and former Commissioner for Special Duties & Vulnerable groups, Rtn. Precious Achumba; and the immediate past Abia State Commissioner for Women Affairs and Social Development, Rtn. Ukachi Amala maintained that the club promotes a lot of easy friendships through “what we do”, hence the milestones recorded within the period under review.

They said they were thrilled that they got to remain united, pointing to the charter and present members of the Club and also having new younger members to carry on the traditions of the Club.

Speaking during the event, a Past Assistant Governor, PAG Eric Chukwu commended the Club for the strides recorded and for the spirit of goodness and oneness existing in their midst.
PAG Chukwu who said he was very much intoxicated by the outdoor fellowship, expressed joy that the Club is doing wonderfully well.

Earlier in his speech, the Visionary President of the Club, Rtn. Emeka Wachuku expressed gratitude to God for the Club’s 4th anniversary, even as he paid a glowing tribute to the late PAG Ukpai Agwu Ukpai, their benefactor, who he described as a “Uniting Force”.

His words, “Rotary Club of Umuahia Government House was chartered on 12th November, 2018. The Club has been into ups and downs, haven experienced some of our teething problems. We had a benefactor, who was our uniting force, PAG Ukpai Agwu Ukpai. Unfortunately, he was snatched away from us by the cold hands of death. He was a rallying factor. At his death, the Club was threatened with extinction”.

Rtn. Wachuku who announced that they have injected new life into the Club with harvest of new Rotarians, encouraged members to eschew anything that would bring division and rather join in the building of the Club.

“We’re proud of our history and still thrilled about being part of the district and looking forward to our next level of growth and development”, Rtn. Emeka Wachuku, the Visionary President of Rotary Club of Umuahia Government House further said.

The event which saw the Club celebrate the birthday of her member, also saw the Abia State Head of Service, Rtn. Onyii Wamah, Principal Secretary to the wife of Abia State Governor, Chief Mrs Love Ezema, other Rotarians, Rotaractors and guests in attendance.