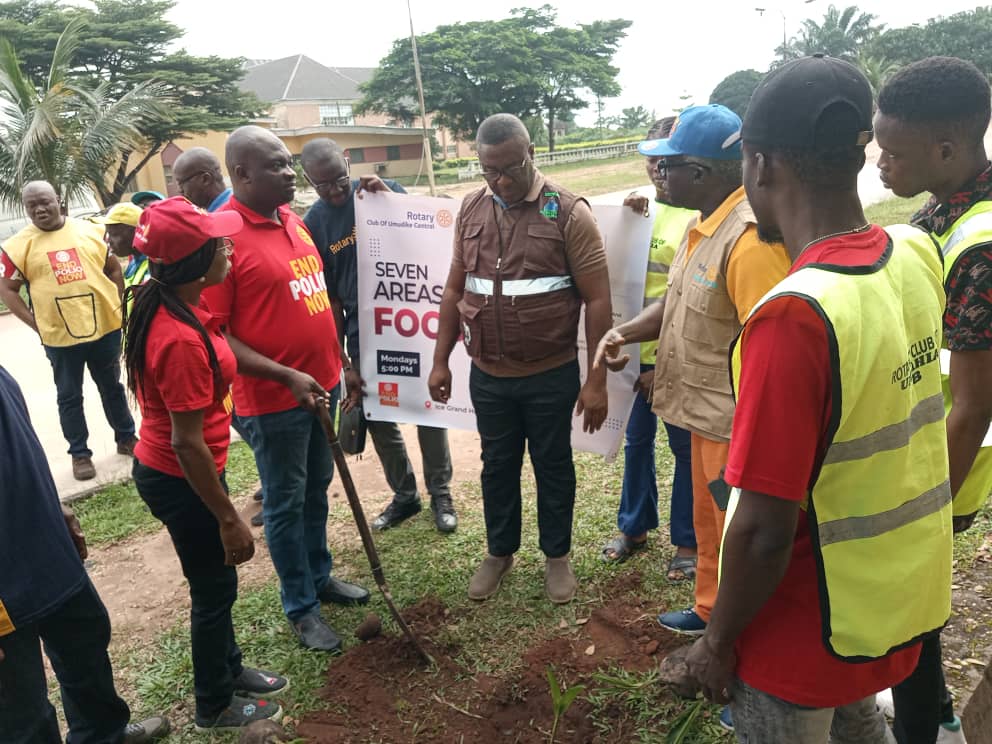 The Rotary Club of Umuahia, District 9142, Saturday, embarked on a tree-planting campaign (a support for the environment project) at the premises of Broadcasting Corporation of Abia, BCA, Umuahia.

Speaking during the tree planting campaign, which saw the presence of the Director General of the BCA, Sir Anyaso Anyaso, the Visionary President of the Club, Rtn. Ugochukwu Ajawara said the project is a novel area of the seven focus in the service project arm of Rotary International, created to engage Rotarians as Ambassadors of beautiful and safe environments by planting trees in their localities, to reduce the harmful effects of the ozone on the human race.

He enjoined the government, residents and other organizations to join hands with Rotary Club to promote healthier well-being by planting more trees.

Also in his speech, the Assistant Governor Zone 5, District 9142 AG Ekele Ochiabuto decried the level of deforestation and bush burning that is prevalent in the Nigerian setting and warned that it is negatively affecting the ecosystem.

According to AG Ochiabuto, “We need to rejuvenate our environment and make sure that all these deforestation will be checked through re-aforestation”.

On the benefits of trees planting, the Visionary President, Rotary Club of Umuahia Central, Rtn. Eugene Uhuaba listed that tree planting adds beauty to the environment, protect the environment from erosion menace and aids in the exchange of gas.

His words, “Rotarians want to conserve and protect our environment and we want to encourage Abians to take a cue from what we are doing. We want them to join the Rotary Club to save our environment”.

Earlier, the Rotary Club of Umuahia North Service Project Chair and  Past Assistant Governor, PAG Chimdi Oluoha said planting of trees to protect and conserve the environment is one of the seven areas of focus of Rotary International, that is Protecting the Environment.

He said that it became important for the Club to embark on the project in order to protect the environment from the effects of erosion and also promote a healthier and greener environment.

The Director General of BCA, Sir Anyaso Anyaso who planted some trees during the exercise, lauded the Club for the humanitarian services they are rendering to the Society and appreciated them for selecting the BCA premises for the tree planting exercise.