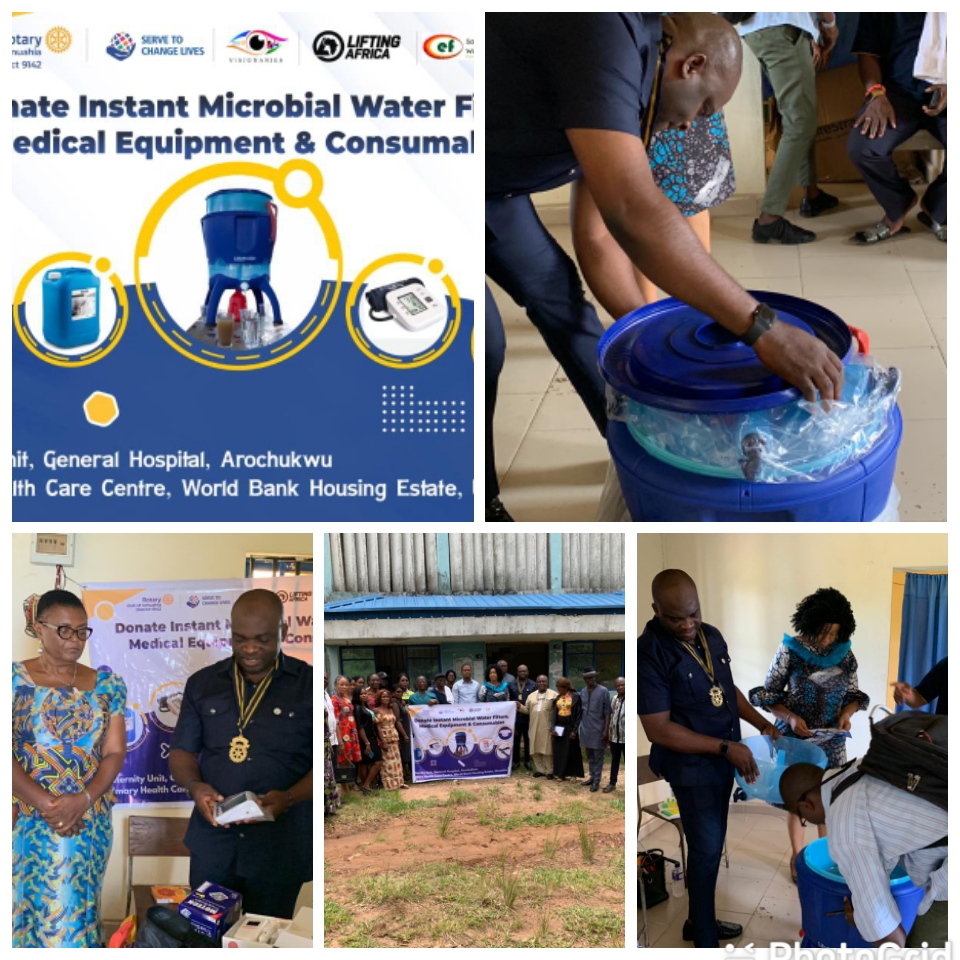 In a positive move to sustain the promises made during his installation as the 41st Visionary President of the Rotary Club of Umuahia, District 9142,  to embarked on remarkable projects which revolves around the seven areas of focus of Rotary Service, Rtn. Ugochukwu Ajawara led administration in collaboration with Environ Focus and Lifting Africa, has donated medical equipments worth thousands of naira to the General Hospital, Arochukwu, in Arochukwu L.G.A, of Abia state.

Speaking while making the presentations at the Hospital, the President of the Club, Rtn. Ajawara explained that the gesture is to support the delivery of medical services to pregnant and nursing mothers, pointing out that Government alone cannot cope with problems of the entire populace.

He stated that Rotary Service is based on seven areas of focus, two of which the presentation aims to cover, that is, Water, Sanitation & Hygiene, as well as Maternal & Child Health.

Lending her voice, the District Governor-elect, Rotarian Grace Okaro traced the sustained partnership between Lifting Africa who are the donors of the Water Filter and EnvironFocus, pointing out that the importance of safe drinking water cannot be overemphasized especially where it concerns pregnant and nursing mothers.

She explained how a needs assessment was carried out before procuring the other equipment and consumables which were donated alongside the Water Filter.

She also extended the hands of friendship and fellowship to the Management staff of the hospital to join the Provisional Rotary Club of Arochukwu Kingdom whose members were part of the delegation during the presentation ceremony.

Contributing, the President-elect of Rotary Club of Gbagada, District 9110, Rotarian Alozie Nsirimobi exposed the network opportunities that are available in Rotary Membership especially to professionals and encouraged the Chief Medical Officer, Dr. Michael Okpugo and his team to join.

In appreciation after receiving the presentations, Dr Okpugo expressed surprise that Rotarians could go to this length to identify and provide solutions to the needs of the hospital in order for the staff to improve on the services provided.

He promised to join the Provisional Club in Arochukwu and also ensure that the members of staff come on board.

In another development, the Rotary Club of Umuahia, District 9142 recently moved its weekly fellowship to Nenetels Guest House, Arochukwu on a familiarization visit to the Provisional Rotary Club of Arochukwu Kingdom, in Arochukwu L.G.A, of Abia State.

The Visionary President of the Club, Rotarian Ugochukwu Ajawara was accompanied on the visit by the District Governor-elect, Rotarian Grace Okaro, the Youth Service Chair, Rotarian Chukwuemeka Ogelle, the New Club Adviser, Rotarian Nkechinyere Maduagwu, the President-elect of Rotary Club of Gbagada, Rotarian Alozie Nsirimobi and Rotaractor Chibueze Nwosu of the Rotaract Club of Umuahia CB.

Rtn. Ajawara who presided over the fellowship which was attended by members of the Provisional Club and Rotaractors of the Rotaract Club of Arochukwu CB, expressed appreciation for the turn out of members of the Rotary Family in Arochukwu to support the presentations made earlier at the General Hospital.

He encouraged the members of the Provisional Club to work assiduously to change the status of their club to a full fledged Rotary Club.

The fellowship also witnessed an interactive session on Rotary Basics lead by DGE Grace Okaro, Rotary Information, songs and presentation of the Presidential Installation Brochure of RC of Umuahia to both the club and Rotarian Alozie Nsirimobi.