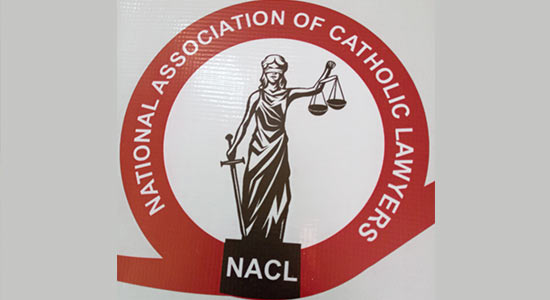 The Umuahia Diocesan chapter of The National Association of Catholic Lawyers, NACL has been officially inaugurated with a con-celebrated Holy mass by the Auxiliary Bishop of Umuahia diocese, Most Rev. Michael Kalu Ukpong, at Mater Dei cathedral, Umuahia, Abia State.

First inaugurated in 2001 at the National level, the establishment of the NACL was the brain child of the Catholic Bishop’s Conference, a project which has been on the front burner for more than 20 years.

In his speech during the occasion, the NACL National President, Barr. Chukwuma Ezeala represented by the National Financial Secretary, Barr. Oby Onyeulo made it clear that the association run their services almost free of charge for the indigent/less privileged and have also outstanding legal luminaries in the prominent positions in the country.

Also in his address, the Umuahia Diocesan President of NACL Barr. Isaac Nwachukwu revealed that the body has been working silently since the year 2017 and has helped and still helping the Church in her legal issues.

His words, “The Association in Umuahia has so far performed creditably well in prison ministry by securing release of indigent awaiting trial in-mates and in handling the Church’s legal issues.

“For us in Umuahia, since 2017, we have been working to give the Association a firm footing in Umuahia”, Barr. Nwachukwu buttressed further.

In his lecture titled, “Espirit De Corps In The Legal Profession”, the guest lecturer, Hon. Justice KCJ Okereke pointed out that every legal practitioner must have and demonstrate espirit de corps if the glory of the legal profession must be sustained but decried that the lawyer whose word is his bond is fast becoming endangered species.

Hon. Justice Okereke stated, “The sinners are fast outnumbering the righteous. This is because professional misfits have infiltrated the profession. These are birds of passage that regard the law and the status of a lawyer as a stepping stone to other adventures, which do not necessarily share the same notion of honour and integrity with the legal profession. It has become the trend for all manner of persons who are on the verge of retirement from their jobs to enroll to study law with a view to retiring as Barrister and Solicitors of the Supreme court of Nigeria. No doubt a good thing in some cases, even as we can bear witness to in this association, some of these entrants, already molded and spent in their careers, turn out to be misfits”.

The guest lecturer reminded members of the association that “Espirit De Corps in the legal profession expects of every legal practitioner to maintain the highest degree of good conduct and carriage, which over the years had made lawyers outstanding role models in any civilized society”.

In his opening remarks earlier, the chairman of the occasion, Hon. Justice Anthony Onuoha (Rtd) encouraged members of the association to see NACL as an association to belong to, as it will make them a better lawyer and a better Catholic.

Inaugurating NACL Umuahia Diocesan chapter during the Eucharistic mass, the Auxiliary Bishop of Umuahia diocese, Most Rev. Michael Kalu Ukpong harped the need for them to embrace Christ lifestyle attributes, adding that, “You cannot abandon Christianity for your profession”.