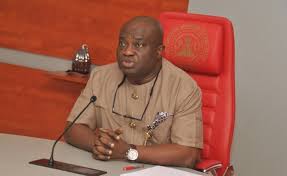 Play The Role Of An Enabler, Gov. Ikpeazu Advises CCB

The Governor of Abia State, Dr Okezie Ikpeazu has encouraged the Code of Conduct Bureau, CCB to play the role of an enabler by finding ways of encouraging individuals to willingly declare their assets through capacity building, seminars among other official/legal ways.

The Governor who gave the advice at Government Lodge, Aba, while receiving in audience a delegation of the newly posted CCB Abia State Director, Mr. Abel Sunday said that despite serving as a watchdog, the Code of Conduct Bureau should go about its duty with a friendly disposition in order not to scare people away.

Gov. Ikpeazu who understands the important role of the Bureau in holding public officers accountable, pointed out that if public officers continue to see the Code of Conduct Bureau as a stumbling block, they would always device means of evading assets declaration.

According to a press release signed by Onyebuchi Ememanka, Chief Press Secretary to the Governor and made available to newsmen in Umuahia, the Governor who also assured that he is committed to ensuring that an enabling environment is provided for the CCB to operate in the State, reminded public office holders in the State that it is not only proper but mandatory to declare their assets before they begin to function in their official capacities.

While directing the Secretary to the State Government, Barr. Chris Ezem and relevant officers to ensure every public officer complies with the constitutional obligation for assets declaration, Gov. Ikpeazu said, “Henceforth, no public office holder would be sworn-in unless there is evidence that such individual has declared his assets”.

The Governor congratulated the State Director on his posting to Abia and enjoined him to see Abia as his second home having served as a youth corp member in Abia State several years ago.

Earlier, the State Director of the Code of Conduct Bureau (CCB), Mr. Abel Sunday said he came to pay homage to the State Governor as the newly posted CCB boss and to seek his collaboration to fight corruption in the State and Nigeria at large.

He noted that while some public office holders in the State have declared their assets, others  are yet to do so, stressing that the constitution enjoins them to declare their assets even  before assuming office and afterwards.

Mr. Sunday assured the Governor of the commitment of his office to continue to cooperate with the State Government in ensuring that public officers do the correct thing under the Nigeria laws.

The Abia CCB boss used the opportunity to inform public office holders that declaration of assets is a constitutional requirement which must be complied with, assuring that his office will provide every necessary support to all public officers in this direction.

He also said that in the appropriate circumstances, his office will also enforce compliance with the law.