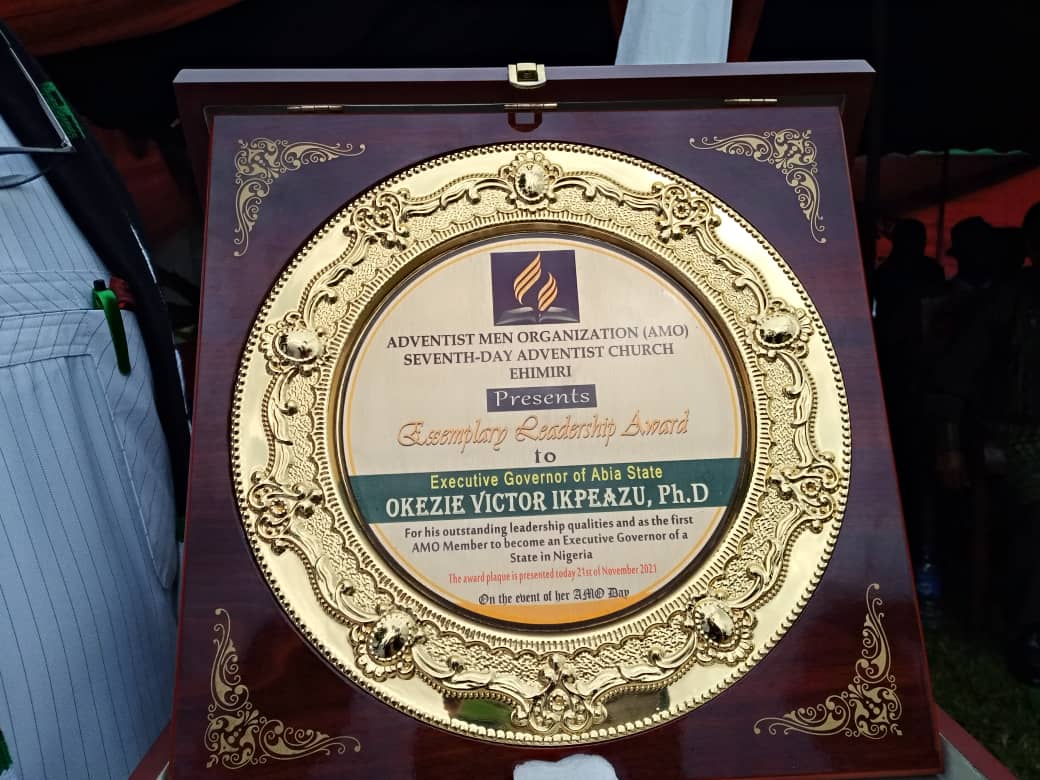 Dr. Okezie Ikpeazu, Governor of Abia State has enjoined Christians to be more dedicated in prayers in these perilous times and remain resilient in their faith in God.
He noted that with uncertainties that constantly envelope the society, this is no time for indolence, frivolities or complains but a period to enroll into practical Christianity.
Speaking at the Seventh-Day Adventist Church Ehimiri District, Umuahia, shortly after being conferred with “Exemplary Leadership Award” alongside his wife, Mrs Nkechi Ikpeazu, who also bagged “Distinguished Service Award”, by the Adventist Men’s Organization (AMO),  SDA Church Ehimiri, Gov. Ikpeazu charged fathers to brace up for their responsibilities of taking care of their families rather than pursuing material acquisition.
Earlier in his opening remarks, the Chairman of the Occasion, Elder John Nwamgborogwu, pointed out that the essence of the AMO, was to witness and win souls for Christ.
He advised Adventists not to compromise, compete negatively, but to remain steadfast in their faith.
Preaching on the topic “WHOM SHALL I SEND, WHO WILL GO FOR ME”, the President, East Nigerian Union Conference, Seventh-Day Adventist Church , Pastor Bassey  Udoh, said God does not look on ability of man, but on his availability when He wants to make use of him.

He therefore, admonished Christians to make themselves available in the service of God and humanity.Earlier in  his welcome address, the AMO Leader, Deacon David Ugwujor recounted the achievements of the Organization to include the acquisition of Ten(10) plots of Land,  building of the Church Auditorium which was completed in 2017, commencement of a Parsonage Project empowering of needy members as well as providing Spiritual Support to family members.

High points of the Ceremony which was attended by the wife of the Deputy Governor, Lady Vivien  Ude Oko Chukwu, ABSIEC Boss, Professor Mkpa Agu Mkpa, AMO Union Director Elder S.O.  Agomoh among others, were lecture on the  “Adventist: Response to Current Realities” delivered by Professor  Chimezie Omeonu.
The event also featured presentation of Certificate of Recognition to deserving Members of the Church, according to a release made available to newsmen by Onyeali Elizabeth, Deputy Director of Information.