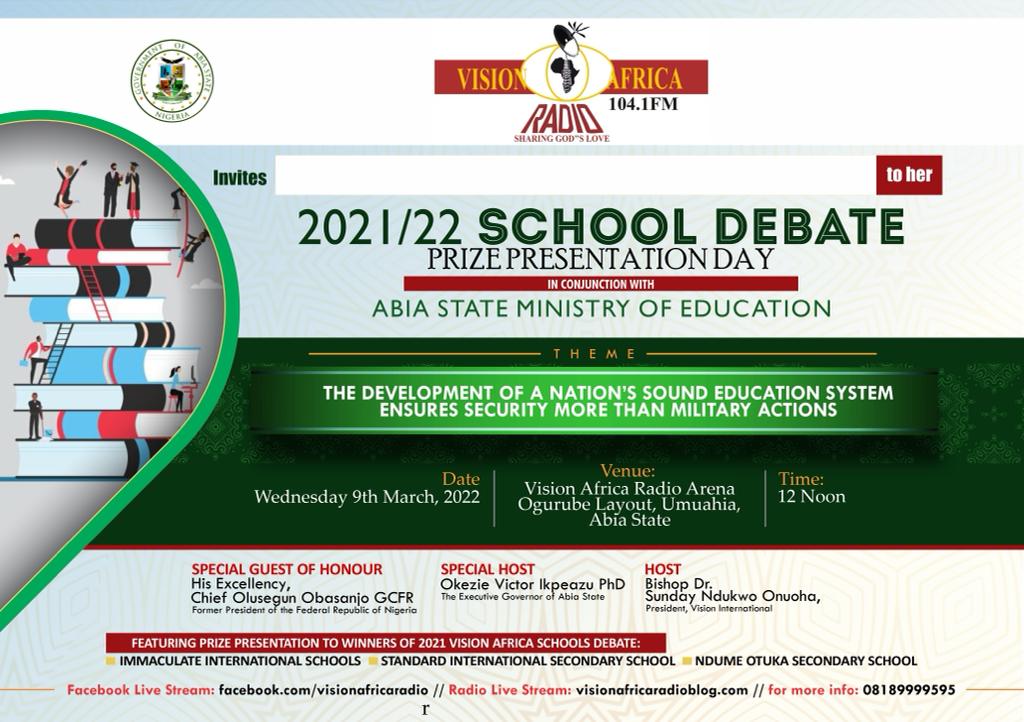 The former President of Nigeria, Chief Olusegun Obasanjo has identified justice, equity, equality among other factors as vital for nation building, as no family, community, state and country can progress without the application of these factors.

Chief Obasanjo who disclosed this during the 2021/2022 school debate prize and presentation day organised by Vision Africa Radio in conjunction with the State Ministry of Education with the theme “the development of a nation’s sound education system ensures security more than military actions”, maintained that equity, justice, common ideals, popular education, shared values, mutualrespect and equality of opportunities remained the ideas of nation building.

Obasanjo advised that Nigeria must first seek to be a nation rather than a country, as he rightly said that “the cart should not be put before the horse, otherwise, Nigeria, in no time will not be a country, but countries.’’

He said that the fundamentals needed to be anchored and propelled by leaders who are persons of integrity, honour, morality, competence, great virtue and must be courageous to do what is right.

According to Chief Obasanjo such leaders must be humble and be able to put a team together to work in selfless devotion and service with the fear of God.

He said, “From personal experience and clinical observation, there is no substitute for steady and uncompromised process of nation-building as we have had in some notable examples in the past that have stood us in good stead.

Presenting the trophies to the winners of the debate competition from Immaculate International school who picked the first position, Standard International School, 2nd and Ndume Otuka community secondary school who came third, Chief Obasanjo congratulated them and advised that they cultivate the habit of being good communicators and skillful in their studies to enable them excel in life.

Speaking also, the State Governor, Dr. Okezie Ikpeazu represented by the Secretary to the State Government, Mr. Chris Ezem described Chief Obasanjo as a true Nationalist who has left worthy legacies for upcoming leaders in the country.

While appreciating the former President for finding time to visit the state as part of activities marking his 85th birthday anniversary, Gov. Ikpeazu lauded the President Vision Africa Radio, Bishop Sunday Onuoha and the State Ministry of Education for organising the debate competition, pointing out that it will help in building better youths that will be great leaders in future and assured of Government’s continued partnership with the station.

Earlier in his address the President, Vision Africa Radio, Bishop Sunday Onuoha said the essence of the school debate was to broaden and sharpen the spoken English language proficiency of our secondary school students and to empower the schools with awards and as well educate and enlighten our teeming audience.

He commended Governor Ikpeazu for reforming and revamping the education sector, adding that over two hundred and thirty five schools have participated in the various editions of the competition.