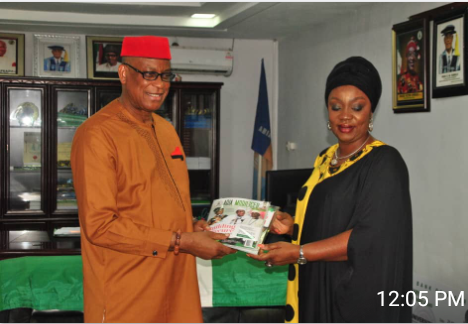 National Orientation Agency, NOA has stressed the need for the youths to be actively enlightened and educated for the 2023 general election.

This has become necessary following the observation that political awakening among the youths in Nigeria is apparently becoming a course gathering momentum.

Dame Ngozi Okechukwu Ph.D, the NOA Abia State Director, in her speech during an advocacy visit to the Vice Chancellor, Abia State University, Uturu ABSU Prof. Onyemachi Ogbulu, appealed to the Vice-Chancellor to support the agency to spread the gospel of a free and fair election in 2023.

She expressed gratitude to Prof. Ogbulu and management for receiving them within a short notice, stating that the advocacy is part of their sensitization exercise, with ABSU as the selected institution.

Responding, the ABSU Vice-Chancellor Prof. Onyemachi Ogbulu reiterated the importance of active youth participation in the election, for credible leaders that would build a new nation of their dreams to emerge.

Going down memory lane, the Vice-Chancellor highlighted the numerous efforts made by past administrations since 1999, to elect credible leaders and observed that there has been slow but steady improvement, from one election to another and expressed hope, that with the passing of the new electoral law, the 2023 general elections will be much better.

He thanked the NOA team for their voters education and enlightenment exercise in the state and promised that his administration will do its part to further sensitize the students on the need to vote peacefully, resist vote buying and other forms of enticement and interrogate political actors on their manifestos as they vote the candidates of their choice.

He also seized up the opportunity to encourage students and youths to go beyond social media engagements to collect their permanent voters card (PVC) from the INEC Offices and ensure they participate actively in the forthcoming 2023 general election.

In a vote of thanks, the Deputy Director, programs, Comrade Victor Orji thanked the Vice-Chancellor and other members of management present for the warm reception.

Highpoint of the meeting was presentation of NOA’s Publicity and promotional materials to the Vice-Chancellor.

The Deputy Vice-chancellor (DVC) Administration, Professor Ogbonna Onuoha and the Registrar, Dr. Acho Elendu was present during the meeting.