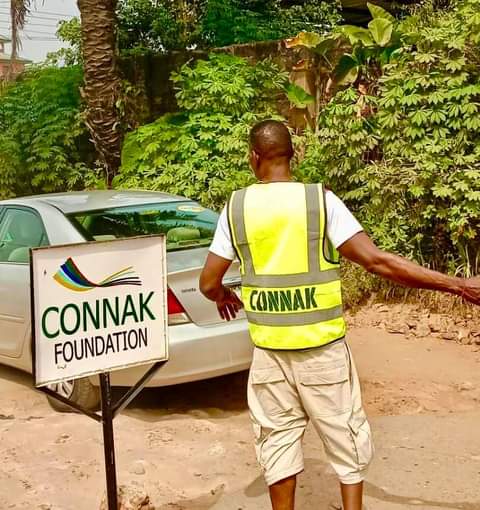 Shop keepers, residents and commuters plying the popular old timber road in Umuahia, the capital city of Abia State have reasons to heave a sigh of relief as CONNAK Foundation embarked on the rehabilitation of the road which also lead to Olokoro clan in Umuahia South L.G.A, of the state.

Residents who woke up to see construction equipment and workers on site, rehabilitating the long overdue old timber road which had suffered neglect for over a decade lauded the foundation for its passion for humanity.

It was gathered that CONNAK Foundation embarked on the maintenance of the road which is currently ongoing after the Residents and several indigenous commuters of the old timber road requested the Foundation to come and alleviate their sufferings through rehabilitating the road.

It was also gathered that the foundation being mindful of the fact that government with its many responsibilities, might not meet up or fulfill the yearnings of her citizenry, approached the Ministry of Works to seek to contribute its quota to the development of Abia State where the founder, Mr Kenneth Ukeagu hails from.

Apart from the rehabilitation of the Old timber – Ohobo – Lowcost -Ohokobe Afaraukwu-Olokoro road, the foundation is currently doing a water fountain park at the Federal Medical Centre, Umuahia, where it had earlier offsetted medical bills of some indigents.

The CONNAK Foundation Head of Protocol, Mr Chike Ekwe, who spoke to a cross section of Journalists, disclosed that the intervention was part of the Foundation’s corporate social responsibility to the community.

According to him, CONNAK Foundation is involved in youth empowerment as well as bringing succour to the people through various initiatives such as the full scholarship scheme, free medical care, entrepreneurship and skills acquisition programs just to mention but a few.

He said CONNAK Foundation decided to embark on the maintenance of the road after the Residents and several indigenous commuters of the old timber road requested the Foundation to come and alleviate their sufferings by rehabilitating the road.

Chike maintained that government cannot do all for her citizens in the present day, hence the foundation decided to approach the Ministry of Works to contribute tits own quota to the development of Abia State.

He recalled that CONNAK Foundation had also collaborated with the Association of Resident Doctors (ARD) on a health outreach in Amuzukwu Ibeku Umuahia; Rotary International on a Tree planting at Holy Rosary Secondary School, as well as the water fountain park at Federal Medical Center Umuahia which is at 99 percent completion.

“These are just the few I can mention to you now in Umuahia, as there are some other projects in Aba that would be unveiled in due course”, Chike added.

The water fountain park at the FMC being constructed by the foundation was another huge step taken by the foundation after paying-off the accrued medical bills of some patients in the hospital, who were not able to settle their bills, Chike further disclosed.

He narrated to newsmen how he approached Mr Kenneth Ukeagu, Founder of CONNAK Foundation and requested him to come to their aide in constructing a fountain park where both patients and their care givers could sit to get fresh air and sightseeing, which he obliged without hesitation.

Prof. Onyebuchi described Mr Ukeagu as a perfect humanitarian Abian, praying God to bless him more for his charitable activities and help to the helpless in the society.

Some of the tricycle operators and residents who live and ply Old timber road, who include Mr. Nmesirionye Ukaegbu, Chairman of Timber Road City Residents Association expressed their love for the kind gesture, disclosing that they had already written off the possibility of the road rehabilitation.

They thanked CONNAK Foundation for the intervention as it would greatly alleviate the sufferings of the road users.