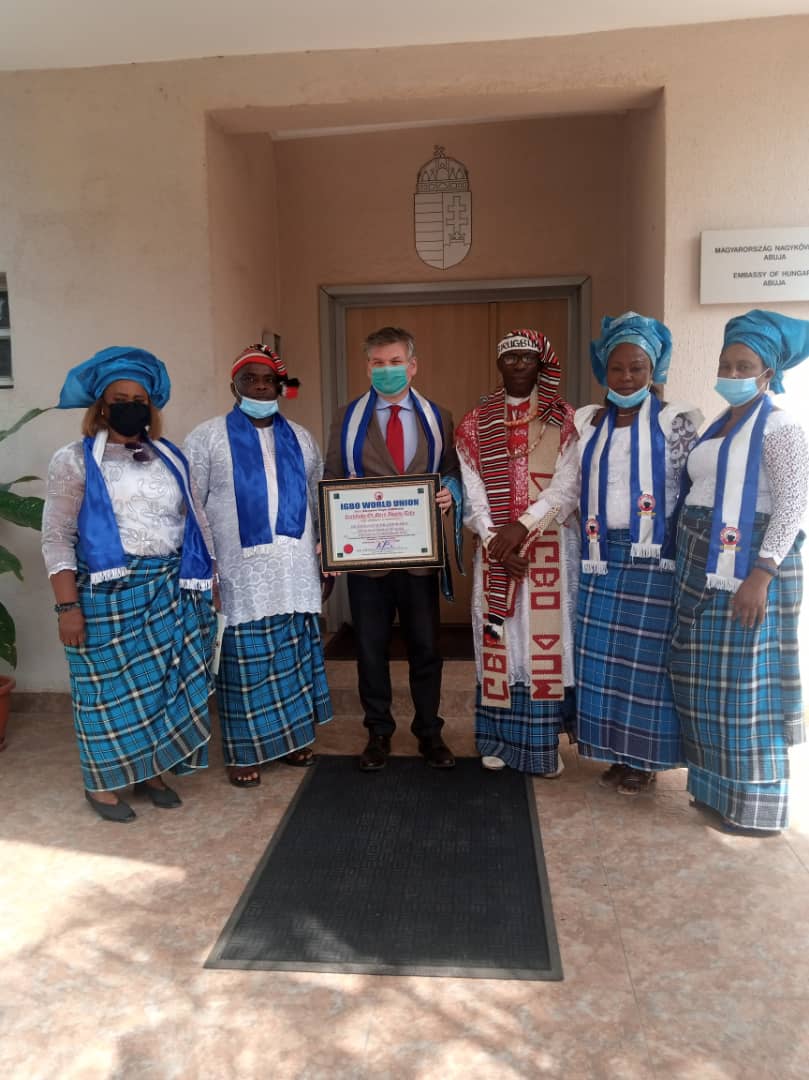 The Igbo World Union, IWU has observed that the Igbos have been well integrated in Hungary, hence the need for a sustained relationship/assistance to Nigerians living in the country.

The IWU President General and Gburugburu Ndi Igbo Dum, Sir Mishak Nnanta, KJW KSM JP who made this observation while speaking at the Hungarian embassy during a courtesy visit to the Hungarian Envoy, His Excellency Dr. Sàndor Beer, at Abuja.

Nnanta who also pointed out the goal of IWU is to protect the rights of Ndigbo at home and in the diaspora, said the Union  strongly believe that the visit would further strengthen the gateway for economic, bilateral and technological advancement between not only the Igbo nation but Nigeria and Hungary.

Nnanta disclosed that the Igbo World Union whose aims and objectives include building bridges across ethnic and religious divide in a plural society like Nigeria, is an umbrella of Igbo advocacy and enlightenment organization that promotes coexistence among Nigerians.

Nnanta who recalled the harmonious relationship that existed between the Union and Ambassador Gabor Termak, the immediate past Hungarian Envoy, which also climaxed to the honour as “OJE OZI OMA NDI IGBO”, according to the Igbo World Union tradition; expressed optimism that such relationship would be maintained and sustained by Dr. Beer.

Responding, the Hungarian Envoy, His Excellency Dr. Sàndor Beer, appreciated IWU for the visit which he observed would build partnership and investment opportunities between Nigeria and Hungary.

He encouraged IWU to also invite his office to enjoy the cultural recreation of the Southeast, while assuring that all traveling bureaucratic bottlenecks and informations about the Igbos traveling from Nigeria to Hungary would be tackled with ease.

The event saw IWU decorate the Hungarian Envoy with “Nwanne Di Na Mba Ndigbo Dum” in recognition of his efforts at showcasing the high rate of professionalism in the discharge of his duties.