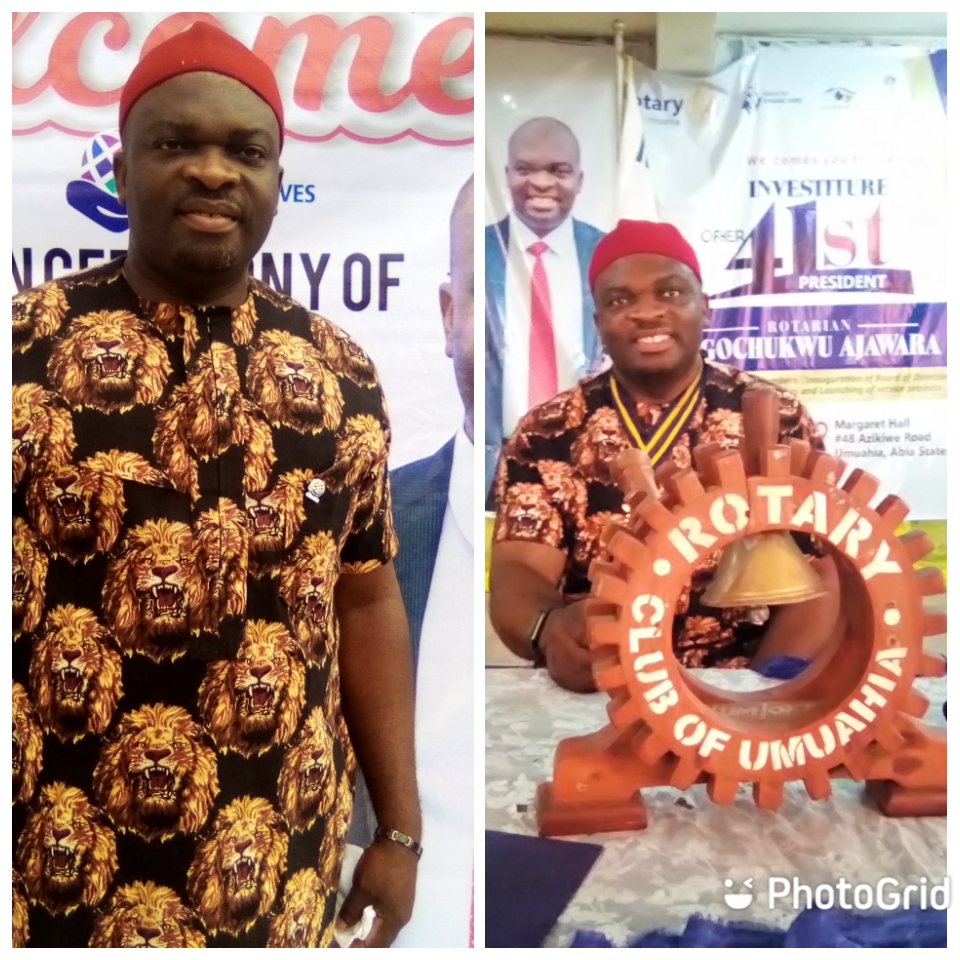 I Will Take RC Umuahia D9142 To A Higher Level – Rtn. Ajawara

The newly installed 41st Visionary President of Rotary Club of Umuahia, District 9142, Rotarian Ugochukwu Ajawara has reiterated the commitment of his led administration to impact and impart positively on the Society through building goodwill and provision of humanitarian services.

Rotarian Ajawara who stated this during his investiture ceremony at Margaret Hall, Umuahia, Abia State, revealed that the Club under his watch has embarked on remarkable projects which revolves around the seven areas of focus of Rotary Service, adding that the Club in collaboration with Environ Focus and Lifting Africa, had donated an Instant Microbial Water Filters, medical equipment and consumables worth thousands of naira to the World Bank Housing Estate Primary Healthcare Center, Umuahia.

According to him, the Club is currently building a toilet facility for Okwuta Community Primary School, Umuahia and would be donated to the school upon completion.

Rtn. Ajawara said, “Rotary Club of Umuahia under my Visionary leadership has also embarked to Tree Planting Exercise to save the environment and also carried out Sanitation Campaign and Exercise in Umuahia, the Abia State capital”, disclosing further that the Club has created much impact in the service of God and Humanity as well as making generosity a top priority in her programmes.

He disclosed that in line with the vision of adopting and training a girl child, which the Rotary International President Shekhar Mehta is propagating, the Club adopted an indigent child, AmBlessed Essien as the Star beneficiary of the humanitarian project, adding, “AmBlessed will not just be trained through Primary School level, the Club had elected to take care of her medical bills, nutritional needs and other wise to see that she becomes happy and robust again.

“We are also building the Rotary children’s park, and will soon empower ten (10) indigent women to enable them become self-reliant and sufficient. Plans are also on top gear to donate 200 toothbrushes and toothpaste to two rural Schools to promote oral health, equipping the state Library Board with Educational materials and sponsorship of ten girls also in skills acquisition among other human development projects”.

He reiterated the need for everyone to engage themselves in some conduct that will always impact positively on lives of the people.

He pointed out that Rotarians are known as people who have the zeal to do everything within their powers to provide humanitarian services, build goodwills and create peaceful atmosphere in the world.
While describing unity as one of the best factors that will make the Club go far in its services to God and Humanity, Rtn. Ajawara called for support, encouragement, prayers, love and cooperation of members to enable him succeed in his twelve months reign in the 2021/2022 Rotary Year.

Earlier in her valedictory speech, the Immediate Past Pathfinder President, Rotary Club of Umuahia, District 9142, Rotarian Lynda Ngozi Dimgba while congratulating the newly installed 41st Visionary President, Rotarian Ajawara who she said will do well in his leadership career, noted that the club concentrated on investing in humanity during the COVID-19 pandemic as well as reached out to those in the rural areas.

Rtn. Dimgba lauded the Club for sustaining the adoption of an indigent and sick ten year old Primary 2 pupil of City Primary School, Umuahia, a native of Ikot Ekpene in Akwa Ibom State, Miss AmBlessed Kingsley Essien who was discovered by her when a team of Rotarians and Rotaractors embarked on the Club’s year 2020/21 Basic Education and Literacy Project at the school.

Contributing, the President, Rotary Club of Obowo in Imo State, Dr Jimmy Anyanwu and former President of the Club, Rtn. Professor Melody Modebelu reaffirmed that they will not relent in the service of God and humanity as it is the reasonable way to ameliorate the challenges facing the people.

In their remarks, Some of the awardees including the substantive Rector of the Federal College of Dental Technology and Therapy, Enugu State, Dr. John Emaimo and the CEO of Virgin Organic Company Limited, Dr. John Osonwa appreciated the Rotary Club of Umuahia for her efforts in reviving lives and called on the Government, Stakeholders and other Non-Governmental Organizations to always extend hands of fellowship and friendship to the vulnerable members of the Society.

The event which attracted the presence of the Rotary District Governor Elect, Rtn. Grace Okaro, Past District Governor, PDG Dan Ajawara among other Rotarians and Rotaractors also features Induction of new members and awards presentation.