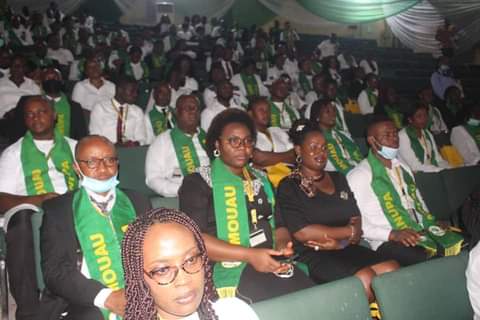 The Vice-Chancellor, Michael Okpara University of Agriculture, Umudike, MOUAU Prof. Maduebibisi Ofo Iwe has enjoined members of the Association of Nigerian University Professional Administrators (ANUPA), MOUAU Chapter to guide against corruption and discrimination acts in their activities as it forms brick walls to effective running of the University.

In his speech at the Senator Anyim Pius Anyim Auditorium of the University while declaring open, a 2-day workshop and induction programme of ANUPA, where over 168 new members of the Association were inducted, Prof. Iwe who spoke through the Deputy Vice-Chancellor Academic, Prof. Udo Herbert further enjoined all administrators to discharge their duties responsibly.

According to Mrs. Ogwo-Agu, an administrator must know how to deal with a variety of personalities, and should be models who ensure that all staff operate within the University laws, rules and standards.

Earlier in his speech, the Chairman of the occasion and former Registrar, Alex Ekwueme Federal University, Ndufu- Alike, Ikwo, Mr Gabriel Oko Chukwu, advised the new inductees to always make themselves available to be mentored by senior colleagues.

He went further to stress that the training is to provide leadership skills for the new professional administrators.

The National Chairman of the association, Barr. Titus Ifeanyi Igwe, who had earlier paid a courtesy visit to the Vice-chancellor in his conference room, urged all administrators to get acquainted with the University rule book, stating that it will help them to discharge their duties within the University codes of conduct.

He also reiterated that ANUPA is not a trade union but an association with a mandate to build the capacity of professional administrators.

The programme featured the administration of oaths to over 168 inductees by Barr. Nneoma Nnochiri.