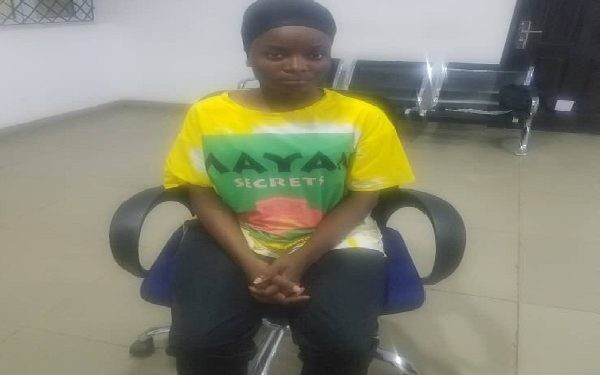 Following the alleged illegal detention of Gloria Okolie by the Nigeria Police Force, who was accused of working hand in glove with members of the proscribed want-away IPOB for over 69 days, the International Solidarity for Peace and Human Rights Initiative has passionately appealed to National Human Rights Commission to take up the matter.

This is even as the Foundation for Environmental Rights Advocacy and Development, FENRAD an Environmental, Human Rights &  pro-democracy Advocacy group, has threatened Legal suit Against Inspector General of Police on the continued detention of Miss Okolie, a native of Umutanza in  Imo state by the Nigeria Police.

In a press release tagged, CONDEMNATION OF UNLAWFUL DETENTION ABUSES AND EXPLOITATION OF 21 YEARS OLD  GLORIA OKOLIE BY THE POLICE AND DEMAND FOR HER IMMEDIATE RELEASE,  PROTECTION AND PAYMENT OF ADEQUATE COMPENSATION BY THE  NIGERIA POLICE FORCE, signed by Comrade Osmond Ugwu, President, International Solidarity for Peace and Human Rights Initiative, Leader of Mass Movement for True Democracy, Integral Development and Good Governance and  Convener of Coalition of Civil Society, Workers and Human Rights Defenders, the body also called on the Amnesty international, Human Rights Watch and other Pro human right organisations, Activists, men and women of good conscience in the world to rise in solidarity with Gloria to ensure that she is is set free, safe from trumped up charges, protected and adequately compensated.

The body stated that, her continued detention, forced labour, media trial and use of derogatory terms and the commendation statement of IGP in the Press statement amount to violation of her fundamental human rights in various categories and by extension are tantamount to violation of sections 34(1), 35(1) and (4), 36(1) and 41(1) of Constitution of Federal Republic of Nigeria, fundamental provisions of African Charter on Human and Peoples’Rights, UN Charter on Human Rights , International Convention on Civil and Political Rights, UN Code if Conducts for Law Enforcement Officers, UN Declaration on the protection of all persons from being subjected to torture and other cruel, inhuman and degrading treatment or punishment.

The body demanded that the Police should the trump-up allegation that bother on terrorism because the fact that she is being used for domestic services has shown that she is  not a terrorist as been branded in the press by the Police.

They also demanded that IGP should Investigate the allegation of forced labour meted to her by some Officers and men of the force while in their custody, discipline the officers accordingly and pay Gloria compensation for the torture and trauma she has been subjected to including the trauma if denial of educational opportunity of entering University with her pearls.

Meanwhile, the FENRAD having seen and studied the litany of releases – including that from the police force itself – on the continued detention of Gloria Okolie, condemned outrightly such unlawful detention which according to the body, “has no basis in our extant laws and constitution”.

In a press release jointly signed by Comrade Nelson Nnanna Nwafor, Executive Director and Barr. Olusegun Bamgbose, Head legal Team FENRAD Nigeria tagged, “Illegal Detention of Gloria Okolie You Will Hear from us at the Court FENRAD threatened Legal suit Against Inspector General of Police”, FENRAD insisted that there is no legal justification for such illegal detention given the contemplation, interpretation and presumption of all extant laws in Nigeria including her constitution.

It is totally amateurish, FENRAD says, that in a world where scientific, forensic and polished investigation has become the order of the day, Nigeria Police still deploys the most crude investigative method.

The release partly read: ‘The rights – to freedom of movement, association, to fair hearing and freedom from degrading and illegal torture – of Gloria Okolie, it should be known, are being trampled upon by state agents and actors this long detention given. We will not fold our arms and let this happen to any Nigerian regardless of their station in life.

“Better Gloria Okolie is by a court of the land found guilty than the police being a judge in its own case as is happening now. FENRAD condemns this in its entirety and will stop at nothing in enforcing the rights of Gloria and if same have been violated will seek redress.

“While we keep following through as a rights group, we only wish to expressly tell the IG and the Owerri command where Gloria has been a resident that fourteen (14) days from the release date of this statement, we shall be willing to test the judiciary, the last hope of common and ordinary Nigerians like Gloria Okolie”.