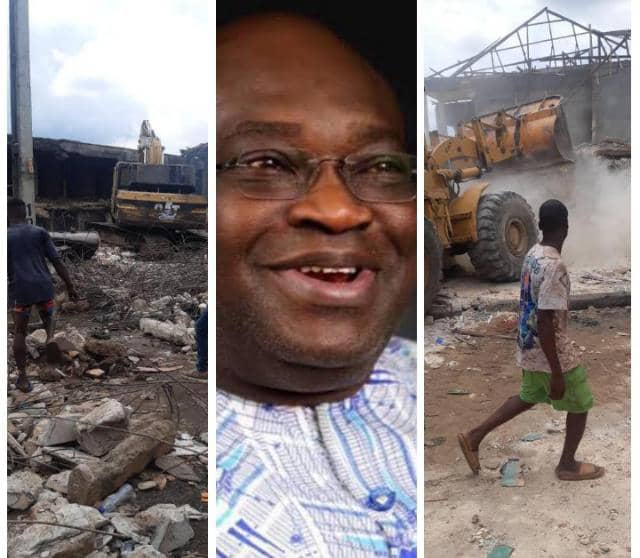 Foundation for Environmental Rights Advocacy and Development, FENRAD, an environmental, Pro-Democracy & Human Rights group has commend the Abia State government on the bold initiative it has undertaken towards recovering the Ariaria International Market.

This is even as an aide to Governor Okezie Ikpeazu, Mr. Loveday Chidi has pointed out that the government of Okezie Ikpeazu was perturbed by the sorry conditions of the market, as he understood the importance of the market to Ndigbo and Nigerians at large and has honestly responded to the plight of traders and buyers in the market by commencing the redevelopment work in A-Line, C-Line and Medical Line in Ariaria International Market, Aba since Wednesday, September 8, 2021.

For the records, Ariaria International Market, one of the largest markets in West Africa, was established in 1976 following a fire outbreak that destroyed the old Ekeoha Market in Aba, the commercial nerve center of Abia State.

Nicknamed “China of Africa” , “Japan of Africa”, because of its versatility in the making of wears and leather works,  Ariaria International Market, an open-air market has numerous names adorned to its status, which also include, the pride of the Southeast.

From findings, the first to come to the place were the timber dealers. The market, which does not suffer from congestion, has a construction designed to accommodate about 40,000 stores.

The economic importance of the Ariaria Market remains the fact that it is the place traders go to buy and sell and if you look at some of the things that are being done in Aba, you will discover that the Market has an overwhelming economic importance within the Southeasterner region, Nigeria and by extension West Africa.

But before the administration of Governor Okezie Ikpeazu came on board, the major challenges that had faced the international market is that of bad roads. Also the gutters and tunnels in the market eerey blocked, creating drainage problems in the market and making the roads impassable during the rainy seasons.

The dilapidated environment of the market is ever ready to pull down tears from even the eyes of a stonehearted person, except the governor. When this writer visited the market for first hand information, it was wailing and gnashing of teeth by not only the traders, but, also, those who came from far and near to buy one item or the other in the market.

It did not only lose its international quality, but, to a large extent its local quality, as traders find it scratchy trading in the market anymore, due to surging flooding that covers the entire market when it rains, damaging goods and property worth millions of naira.

This was Ariaria Market, which is the largest industry in the whole of West Africa with an estimated two million traders, which also operates just like any other international market anywhere in the world as any kind of product, both for human consumption and usage, is readily available.

It is also undisputable that Ariaria people are well known for their dexterity in business transactions. They import goods like shoes, men and women wears and every kind of leather material from different parts of the world, including China, Korea, the United States of America and Brazil.

The market has, since inception, been attracting customers from all over the federation, especially from Akwa Ibom, Cross River, Rivers, all the Eastern states and even from Cameroon, as Cameroonians are major buyers of leather products, particularly shoes manufactured in the market.

In a release jointly signed by the FENRAD Executive Director, Comrade Nelson Nnanna Nwafor and Barr. Akande Femisi, Head Corporate Accountability and Human Rights Enforcement and made available to newsmen in Umuahia, the Foundation however condemned what it perceived as the condition of the market which is not made any better in recent times given the perennial rainfall which has made the market inaccessible by even foot.

According to the Foundation, “Surface runoff, without outlet or channel, remain for days forming turbid muddy water which constitute health hazard to business and shop owners. If situation in the market is not timely mitigated could render potency to the flood disaster forecast by Nigerian Meteorological Agency, NiMet, that Abia and other states in the federation face getting overwhelmed”.

FENRAD urged affected shoppers and sellers, in the affected areas of A-Line, C-Line and Medical Equipment Line to see the ongoing redevelopment plan of the government as a necessary penance.

Moreover, the Foundation called on state government to ensure, as it has promised to, that no single legitimate shop owner loses their shops to the ongoing redevelopment plan, as happened before with Ekeoha Shopping Centre.

The release partly read, “To this end, the stop-gap measure of temporary relocation while on should allow for proper documentation of shop owners. FENRAD calls on government to ensure that, following the new master plan, the market is completed with parks, convenience facilities,fire fighting unit and facilities.

“Past experiences, especially during dry season, show that the market has, on many occasions, been gutted by fire resulting in losses by shop owners without recovery due to absence of fire unit. FENRAD believes that in the interest of environmental safety the market should, when and after completed, have a mini fire unit with fire fighting Equipment and other Amenities.

“FENRAD remind the  Developers that Works should not tarry more or longer than necessary as is currently happening in Ahia ohuru Market where the Developers could not beat the Government reconstruction deadline.

“FENRAD calls on government to ensure that work is speedily completed without hitches so that business resumes in earnest and urge the developers to be committed to complete the required work in the phase and ensure the establishment of proper drainages with in the Affected lines.

Meanwhile, an Aide to Governor Okezie Ikpeazu, Mr. Loveday Chidi has insisted that his boss, Gov. Ikpeazu has remained outstanding as traders have continued to pour accolades for the strides he has recorded, particularly the reconstruction Of Ariaria International Market.

He admitted that it is always difficult to impress everyone, adding, “but when you are on the right track and you know your direction, the rest will wait for the day of reward”.

He said that the commencement of the redevelopment work in A-Line, C-Line and Medical Line in Ariaria International Market, Aba is another testimony that Okezie is focused on transforming Abia State to top in the list of Major Cities in Nigeria which he has almost achieved.
His words, “Of a truth, the popular Ariaria International Market will wear a more befitting and elegant look as soon as Gov. Ikpeazu finished his wonderful works in the market”.