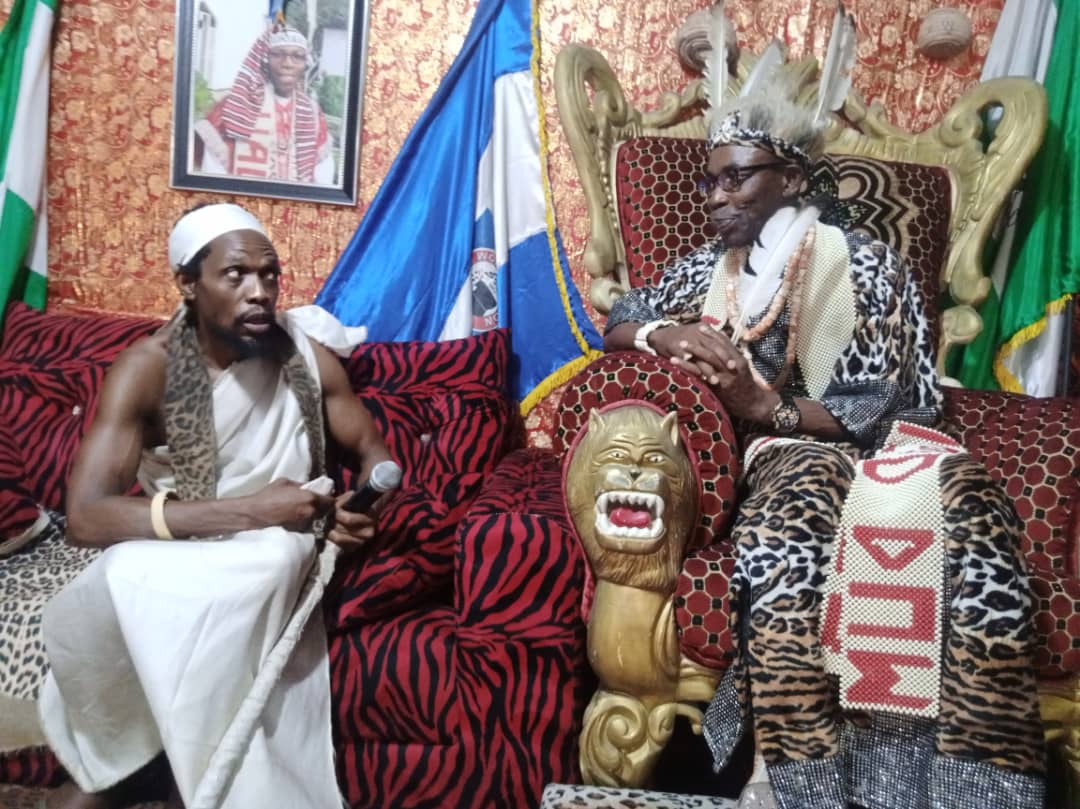 The IPOB leader Mazi Nnamdi Kanu would be released and reunited with his family on the 28th day of February, 2022, Ezeudo Awkuzu, Igweagu Igbonine Ikem Okoyedike has predicted.
Recall that during a meeting of Ndigbo Royal Heritage Worldwide NIROH which held at Umuahia, the capital city of Abia State, Friday 12th November, 2021, Ezeudo Awkuzu proclaimed that nothing would ever stop the IPOB leader from being “physically present during his Igu Aro festival on February, 2022”.

Ezeudo Awkuzu made this proclamation during the formal recognition of the Gburugburu Ndigbo Dum and President General of Igbo World Union, IWU His Imperial Majesty Sir Mishak Nnanta, KJW KSM JP at his Ikiri agu palace in Umuajata-Olokoro as one among the seven Udogu Gold Lions and subsequently the inauguration of Udogu People’s Right Initiative, UPRI in Umuahia, Abia State.

He tasked Sir Nnanta and other UPRI members who were made up of Igbo children born from 1970-1976 to look into why Igbos do not currently speak with one voice and come up with their findings/ proffer a lasting solution to it on or before May 4th, 2022.

Ezeudo Awkuzu who described the group as a divine team that would birth a new Igbo nation, further charged them to rally the Igbo tribe across the country and all over the world, defend their rights at all times as well as ensure fair standard of living across the Igbo tribe.

Ezeudo Awkuzu who also described Sir Mishak Nnanta whom he said has the blessings of Dim Chukwuemeka Odumegwu Ojukwu as an icon to the society and revealed that he was one of the three persons who falls within the ‘Ebubeagu, Odum ririeze and Akajiugo, whom the Igweagu Igbonine has long been searching for.

He expressed joy that Sir Nnanta has been found finally, hence the need for him to brace up to the daunting task ahead and reunite the Igbos.

He however encouraged Nnanta to shine forth as his light has come and fly with the UPRI  to ensure that the Igweagu prophecy come to pass.

He further described the event as a special one as it came on the 15th day of January, 2022, that is, 52 years after the civil war.

His words, “In 1968, at Okeofia Ifitedunu, some Biafran soldiers had an encounter with a group of wild cats. In the encounter, they were told by the cats that the Igbos should surrender in the war as there was no way they could defeat their opponents because whereas their opponents were well prepared for the war, the Igbos were ill prepared spiritually and otherwise. The cats told the soldiers that if they surrender in the war, that those Igbo children born from the year the war ended to the sixth year that at their gold age, 50 years, they will unite and make the Igbo nation speak with one voice”.

He disclosed that Ndigbo Royal Heritage Worldwide, NIROH was also established to coordinate the Ezumezu Ndigbo Royal Ordained Heritage and it is working towards being the Oracle for the creation of Igbo Kingdoms in every country of the world.

Ezeudo Awkuzu reiterated the need for Ndigbo, all over the globe, but especially in Nigeria, to rise up to the realities at hand so that the prophesies about the nation would be fulfilled before long.

The event also saw the inauguration of ‘Ikporo’, the female wing of the Igbo children born from 1970 -1976 with  Nwada Nnenna Onyemaowu Kate (nee Kanu) as the leader at Ojukwu Bunker, Umuahia.

Meanwhile, Sir Mishak Nnanta has described the event which took place at the Ojukwu Bunker, Umuahia as symbolical, and recalled that the Ikemba Nnewi, Dim Chukwuemeka Odumegwu Ojukwu was crowned as Eze Igbo Gburugburu in 1996 during which a royal movement was launched for the Igbo nation agenda, as a follow up to the 1968 Okeofia prophecy about Igweagu.

He believed that Igweagu Igbonine spotted him as one of the three persons who falls within the ‘Ebubeagu, Odum ririeze and Akajiugo in recognition of his painstaking efforts to ensure that the Igbos are given their proper place in Nigeria and that Igbo language does not go into extinction.