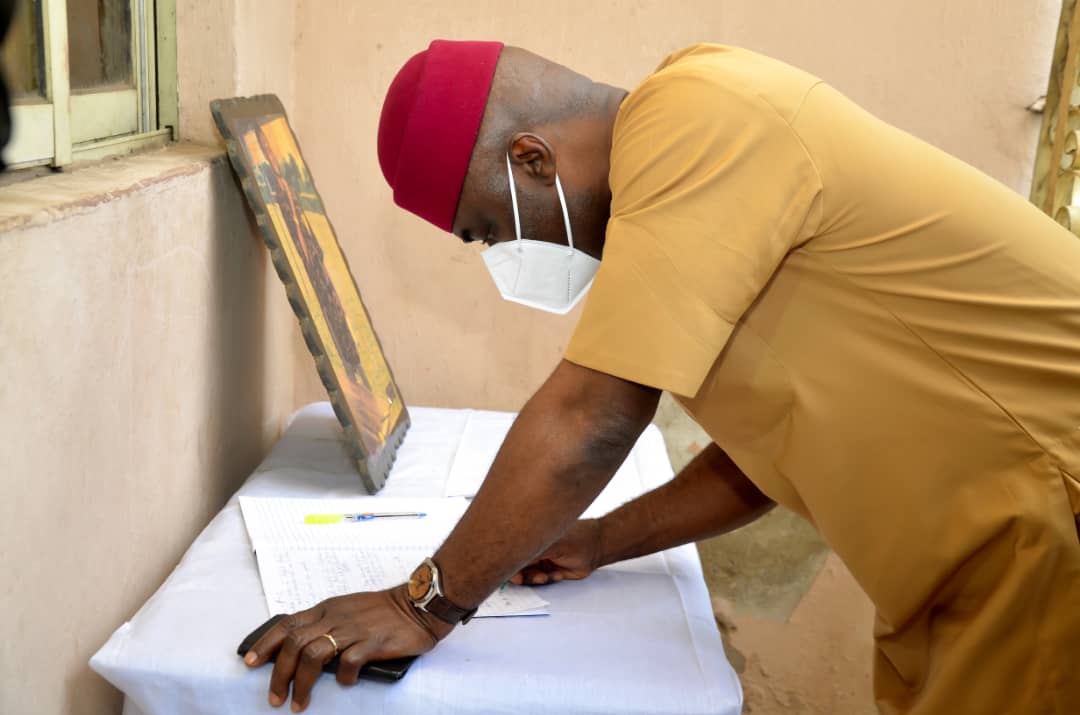 Sir Ude Oko Chukwu, the Abia State Deputy Governor has condoled with the family of the Chief of Staff to the Governor, Prof Anthony CB Agbazuere over the demise of his wife, Lolo Onyinyechi Agbazuere after a brief illness.

Speaking during a condolence visit to the Umuahia residence of Prof. Agbazuere at Ogurube Layout, Umuahia, the State capital, Sir Oko Chukwu said his family and entire Abians received the death of his beloved wife with sadness and a huge shock, recalling that he was with them when he in company of his late wife recently received Chieftaincy titles from the Ohuhu Clan.

The Deputy Governor urged the Chief mourner, Prof Agbazuere and other bereaved members of the family to take heart, adding that, “In times like this, issues that borders on death are beyond man’s control and can only be explained by God who determines the fate of every mortal”.

He further advised the chief mourner to take the demise of his wife as the supreme will of God, having done everything humanly possible to ensure that her health was restored and prayed God to give them the divine grace to bear the irreplacable  loss  with fortitude as well as grant the soul of the deceased eternal rest.

Responding on behalf of the family, the Chief of Staff to the Governor and Chief mourner, Prof Anthony CB Agbazuere who said that what befell them was very mysterious, surprising and very difficult to comprehend, described his wife late wife, Onyinyechi as his strength, prayer warrior and one of the brain behind his success stories.

Prof Agbazuere said he cannot question God over the sad loss but expressed pain that his beloved wife had to die at the young age of 43 years without reaping the fruits of her labour and prayed God not to allow them experience such loss, while appreciating the Deputy Governor for all the show of love he has always extended to his family.

Shortly after, Sir Oko Chukwu also paid a condolence visit to the Mpamah family over the death of their son, Chief Uche Francis Mpamah at their residence in Umuahia.

The Abia Deputy Governor who also signed the condolence register, was accompanied by the State Secretary of the PDP, Barr. David Iroh, former Transition Committee Chairman, Bende LGA, Chief Princewill Onyegbu and many other government personalities.

In a related development, the Chancellor of Gregory University Uturu, GUU Prof Gregory Ibe has expressed deep grief over the sudden demise of Mrs Onyinyechi Agbazuere, wife of the Chief of Staff to the Governor, Prof Anthony Agbazuere and Chief Uche Mpama, a former Commissioner, describing the tragic incidents as unfortunate, shocking and devastating.

Reacting to the sad news which filtered to the media on Saturday morning, Prof Ibe decried the rising cases of high profile deaths in the state in recent times and called for prayers to secure divine intervention.

According to him, “It’s unfortunate that while we are yet to recover from news of the demise of the two great Amazons, Lady Victoria Aguiyi Ironsi and Nneoha Adanma Okpara, we are further distressed by the disturbing story of the deaths of Mrs Onyinyechi Agbazuere, wife of the Chief of Staff to our Governor and my dear friend, Chief Uche Mpama, a former commissioner for sports. Indeed these are trying times that call for fervent prayers to God to secure his divine intervention and ensure that this kind of affliction over our state is completely averted”.

Condoling the bereaved families, Prof Ibe enjoined them to bear their lose with equanimity while looking unto Jesus, the author and finisher of our faith. He therefore prayed for the peaceful repose of the souls of the departed.