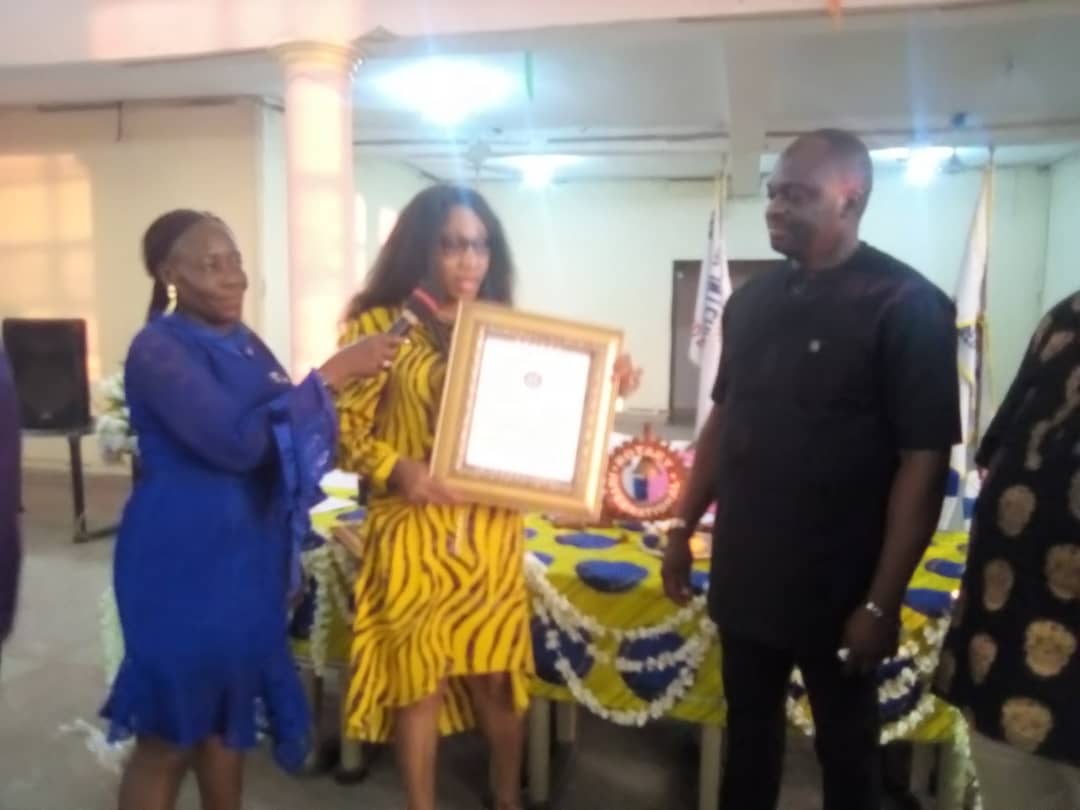 Change Of Baton: Accolades As Rtn. Dimgba Bows Out

The most significant thing, this reporter did on arrival at Margaret hall, the fellowship venue of Rotary Club of Umuahia, District 9142 was appreciating the beauty and rich colourfulness of the place.

Daylight had begun to drain away, evening shadows deepened into blue and purple, although the sun still cast a faint yellow light through slowly gathering evening, as the 40th President of the Club, a well dressed, properly-accesorized woman, Rtn. Lynda Dimgba presided over her last fellowship as the Pathfinder President of the year 2020/2021 Rotary Year.

In a brief speech during the in-house hand over ceremony, Rtn. Dimgba appreciated God and Club members for the love and support given to her team while her tenure lasted, despite the challenges which included the COVID19 pandemic, death of Club member – Rtn. Steve Ogueri Nwaubani, ENDSARS protest and unknown gunmen saga that enveloped the year 2020/21 Rotary Year, which runs from the first day of July to June.

While also appreciating her Club members for giving her the permission to serve, she pointed out that despite the hiccups, her led administration was able to record remarkable footprints on the sands of time.

Going down memory lane, a Past Assistant Governor in District 9142, Rtn. Chimdi Oluoha singled out a humanitarian gesture of Rtn. Dimgba, one of the remarkable achievements within the Rotary year, which was the adoption (Club adoption) of a nine year old girl, Blessing Essien.

Little Miss Blessing Essien, who intermittently isolates herself from other pupils, according to Rtn. Oluoha was identified by Rtn. Dimgba, during one of the Rotaract assignments at City Primary School, Umuahia, Abia State.

Out of passion and compassion which Rotary Club is known for “Service above self”, little Blessing was diagnosis which was funded by Rtn. Dimgba led administration, medical experts observed that she had tuberculosis and other complications. Her parents’ earnings too weak to take care of her health. Her father works as a gateman and mother, doing practically nothing; and they live in an uncompleted building, according to the findings of Rtn. Oluoha.

Rtn. Dimgba and her team that is poised to serve humanity, adopted the girl and presently, she is receiving medical attention at the Federal Medical Center, FMC Umuahia.

The Past Assistant Governor eulogized Rtn. Dimgba and her team for the action and lauded other members who contributed in various ways to the success of Rotary Club of Umuahia, at the District and International levels.

In their respective speeches, the District Governor-elect, Rtn. Grace Okaro; Immediate Past Assistant Governor zone 3, Rtn. Ogechi Oguma, a one time President of the Club, Rtn. Lucky Akabuike pointed out that Rtn. Dimgba’s team stayed together and that motivated them to achieve greater things within the Rotary year despite the headaches of year 2020 and 2021.

Particularly, Rtn. Oguma lauded the symbolic and symbiotic relationship that existed between her and Rtn. Dimgba which made her assignment as Zone 3 Assistant Governor easier.

Speaking shortly after he was handed over the mantle of leadership, the new President of the Club, Rtn. Ugochukwu Ajawara who eulogized the sterling attributes and performance of the immediate past president, Rtn. Lynda Dimgba which kept the club united, assured members of a better 2021/2022 Rotary Year.