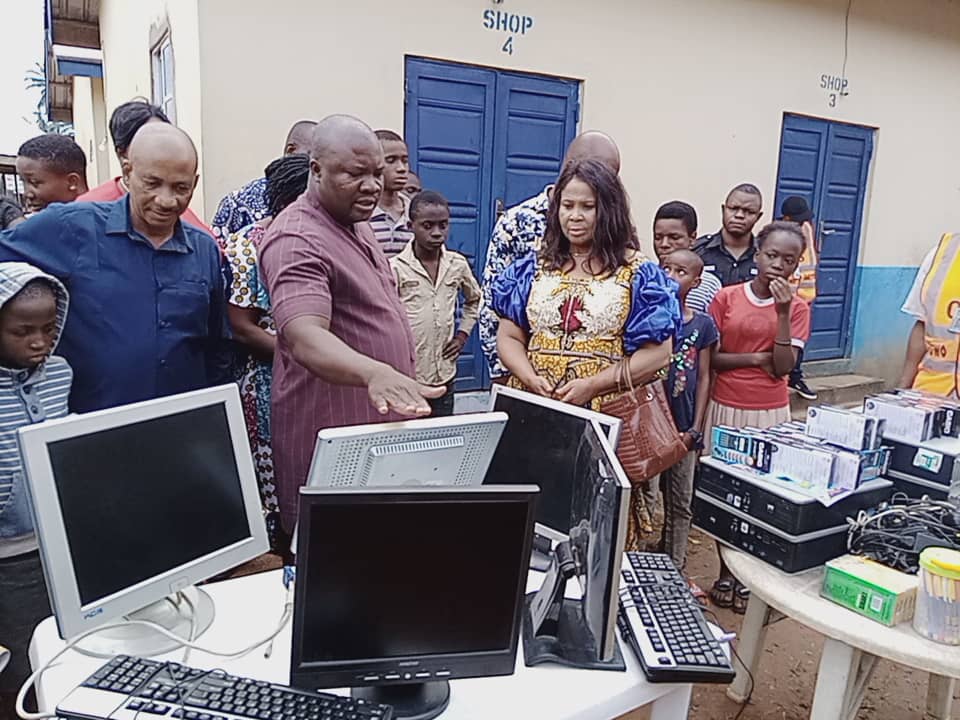 “In our local Communities, we do not have any computer set, but today, we have not only one but many. Mr. David Udochukwu has come to our rescue and we are eternally grateful”.

It was carefully gathered from the villagers who witnessed the event that Pupils’ enrollment at Ikwueke Central School gradually reduced because parents discovered an alternative, a well renovated and equipped neighbouring public primary school, Ahuwa-Oboro Community Primary School, where teaching and learning flows effectively and efficiently in a conducive environment.

The challenges facing primary education in Ikwueke are large and might also be complex. One could observe some years of isolation combined with limited access to development, which have resulted in a gradual decline in the quality of education.

The elated Master Chilaka Emmanuel who spoke on behalf of the other pupils lauded Mr. Udochukwu for the good works he is doing in the education sector and prayed God to always sustain him with good health and great riches.

Some of the villagers who also spoke during the event, who included, Mr. Richard Chukwuma; Mrs Chioma David and Mr. Onyedikachi Enyinnaya appealed to parents to get their children back and enroll them in Ikwueke Central School, as there is a lot to gain following the intervention of Mr. Udochukwu and other hopeful dividends coming from the Local Government Education Authority.

They applauded and appreciated the efforts of Mr. Udochukwu for the thoughtful idea to support the Central School with educational materials, adding that the humanitarian aid has made positive impacts in Oboro clan and Ikwuano L.G.A as a whole.

They also recalled with nostalgia the selfless efforts of Mr. Udochukwu, who the Chief Executive Officer of Thinkers Corner Hotel, at the peak of COVID19, how he distributed hand sanitizers to the healthcare centers and other philanthropic gestures carried out in the community.

Appreciating the entrepreneur/philanthropist further, the Education Secretary of Ikwuano L.G.E.A, Lady Chinyere Ehilegbu who formally received the items and subsequently handed it over to the Headmistress of the school, Mrs. Ngozi Okiyi, lauded Mr. Udochukwu for adding his quota to the development of the educational sector of the state, which She said was in line with the vision of the State Governor, Dr. Okezie Ikpeazu.

Her words, “On our part, we are flagging off the use of computers in all the primary schools. We have also introduced vocational training/studies in all our primary Schools. We believe that our children are our hope for the future. If we equip them well with the needed skills and academics, our future will be peaceful.

“What Mr. Udochukwu is doing here today is in line with the vision of our State Governor, Dr. Okezie Ikpeazu. And, Mr. Udochukwu has shown that he is a careful observer and true follower of our governor. What he is doing today is, imparting knowledge and boosting the rich vision of our children.

“So, we are happy and grateful to God for what Mr. Udochukwu is doing. He is showing good examples and I want to use this medium to call on other illustrious sons and daughters of Ikwuano to emulate this sterling performance of Mr. Udochukwu and replicate same in their respective Community schools”.

Earlier in his speech before handing over the items to the Ikwuano L.G.E.A Education Secretary, the benefactor, Mr. David Udochukwu observed that genuine educational empowerment should be dedicated to providing access to an educational environment in Ikwuano, which will in turn improved children’s future economic opportunities and affords them fundamental reading skills.

Mr. Udochukwu who went down memory lane to recall the difficulties, he encountered in his quest for qualitative education, said he would not like the history to repeat itself and that moved him to assist children to achieve academic excellence without much sufferings.

He lauded Governor Okezie Ikpeazu and the Speaker of the State House of Assembly, Rt. Hon. Engr. Chinedum Orji for their education and youth friendly Initiatives in the state, adding that the humanitarian gestures he carried out was done in solidarity to the strides recorded by the governor and the Speaker, Engr. Orji.