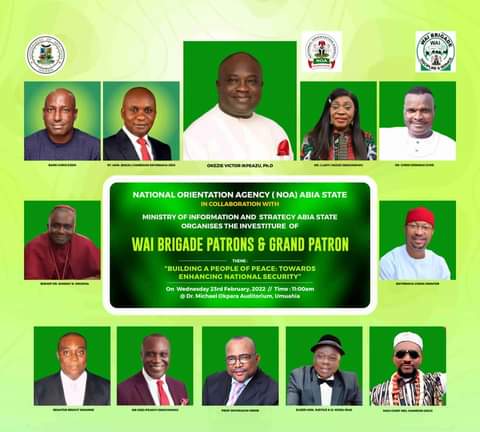 To enhance National Security, there should be mechanisms for immediate actions against conflicts and riots before they escalate to violence, the Co-chair Interfaith Dialogue Forum for Peace, Bishop Dr. Sunday Ndukwo Onuoha has suggested.

Bishop Onuoha, a Methodist Bishop made this suggestion while delivering a keynote speech at the Michael Okpara auditorium, Umuahia during a one day sensitization programme organised by the National Orientation Agency, NOA, Abia State in collaboration with the Ministry of Information on National Security Campaign on the theme,  “Building a People of Peace: Towards Enhancing National Security”.

Bishop Onuoha also believed that insecurity would be reduced if an effective security management system with adequate precautionary measure against spontaneous attacks of terrorists is put in place in the country.

Bishop Onuoha who also regretted that Nigeria has become one of the hotbeds of conflict in Africa, stated that the prevalence of conflicts, manifests in religious intolerance, Political Thuggery, Kidnapping, Drug Addiction, Radicalization and Violent Extremism, pointing out that these vices are the greatest threats to peace, unity, security and development of our dear nation.

He called for a multifaceted approach which include: giving the youth jobs, a supportive environment for Micro, Small and medium enterprises (SME’s), maintaining that these are key in solving the perennial problem of peace and rising insecurity in Africa, particularly Nigeria.

He also decried that there is hardly any day that cases of kidnapping between Okigwe and Enugu, and the Okigwe-Ihube-Uturu-Isuikwuato axis is not recorded to the extent that students in universities and their lecturers have become constant victims to miscreants.

Bishop Dr. Onuoha said the concept of peace and security mainly rests on the principle of sanctity or sacredness of life as well as the absolute necessity to protect and safeguard lives and property.

He stated that socialization to values of peace and provision of services will assist Nigeria in closing up the worsening horizontal inequalities as it is capable of dousing all tensions, adding that humans amid all problems adopt methods of getting themselves out of socio-political marginalization, abysmal state of infrastructural facilities, environmental degradation, and high level of religious intolerance among others.

Bishop Onuoha made it clear that to fight insecurity and foster peace, sensitization campaigns is key while commending the National Orientation Agency (NOA) and the Ministry of Information, for building synergy among them together with relevant stakeholders and actors in the heated polity, adding that the sensitization programme is apt in view of the current challenges confronting the country.

In his speech, the Abia State Governor, Dr. Okezie Ikpeazu represented by the Secretary to the State Government, Mr. Chris Ezem described the event as apt and informed that security is a collective responsibility and should not be left to the security alone.

Also speaking respectively, the Abia state Commissioner for Information and Strategy, Chief Eze Chikamnayo, the representative of Abia State Commissioner of Police, the Sector Commander,Federal Road Safety Corps, FRSC, Abia StateCommand, Mr Paul Ugwu and Chairman of the occasion from Abia State Law Reform and Review Commission, Justice K O Nwosu called for a sustained campaign against social ills, even as they advised that the security campaign should be extended to the grassroots.

Read Bishop Onuoha’s full speech below:
A Keynote Speech by Bishop Dr. Sunday Ndukwo Onuoha, President Vision Africa @ The National Orientation Agency (NOA) Security Sensitization and Re-orientation Campaign in partnership with the Ministry of information, Abia State held at Okpara Auditorium, Umuahia | 23rd February, 2022
Protocols:
Peace is a state of harmony or absence of hostility. It is a state of tranquility, quietness or freedom from civil disturbance. Wikipedia describes peace as a state of harmony characterized by lack of violent conflict and the freedom from fear of violence. It follows that where there is disharmony, civil disturbance or hostility, peace is vacated. People hold the view that every human relationship experience conflict, or that conflict is inevitable and cannot be completely prevented or eradicated in human or societal relations because of the nature of humanity in itself.
It was Ralph Waldo that said that “Nobody can bring you peace but yourself”; simply meaning that to fully reap the benefit of a civil society and good governance in Nigeria requires the full participation of every section of the Nigerian state – the government, the civil society, citizens – you and me, young and old, especially youths and women to be awake to their responsibilities and ensure that Nigeria becomes and remains a safe, strong and prosperous place to inhabit.
It is only our collective, active inclusiveness as a people that can right the long-held injustices, combat violence and peacebuilding, and create an environment for dialogue.Peace building and conflict resolution or conflict prevention should be a high and central priority in a country like Nigeria because these terms and principles are enablers of development, security, social and economic justice, and reconciliation. Peace promotes the optimum environment for human potential to flourish, and for a community to progress; because peace thrives only in tranquility and national security is linked with development.
Unfortunately, the prevalence of conflicts, manifested in religious intolerance, Political Thuggery, Kidnapping, Drug Addiction, Radicalization and Violent Extremism are the greatest threats to peace, unity, security and development of our dear nation. On the flip side of the coin is poverty, unemployment, underdevelopment and a litany of other social vices strung along the spectrum of inexplicable hardship suffered by a people.
I will read out a few public figures, judge for yourself if this is still a country. . .• 1,192 people were killed in Kaduna State by bandits, January to December 2021

There is hardly any day we don’t record kidnapping between Okigwe and Enugu, and the Okigwe-Ihube-Uturu-Isuikwuato axis. To the extent that our students in that university and their lecturers have become constant victims.Where do we go from here and will we ever get there? “Building a People of Peace for a Secure and Safer Nigeria” The concept of peace and security essentially hinges on the principle of sanctity or sacredness of life, and the absolute necessity to protect and safeguard lives and property. The “absence of threat to life, property and socio-economic well-being” of the people is a basic right that Nigerians, and indeed people everywhere should have – where citizensare able to meet their needs, aspirations and expectations – while being free from danger or threats.To fight insecurity and engender peace, sensitization campaigns like these by the National Orientation Agency (NOA) and the Ministry of Information, is commendable; as is building synergy among relevant stakeholders and actors in the heated polity.Peace education and socialization as a means of entrenching culture of peace in the minds of Nigerians, especially children, youths and women should be taken to the grassroots, to the indigent, communicated in the language of those without formal education, and made appealing to the young. Government investment in youth education and empowerment programs is a panacea for combating violent acts in Nigeria. Transparency International’s Corruption Perception Index assessed Nigeria as a corrupt nation. A country is presumed corrupt in their ratings if there is evidence of “abuse of entrusted power for private gain”. Add to that the obvious corruption in sections of the society and gross mismanagement that has become the order of the day. Sadly, we have unwittingly bred a young generation of scammers, deceptive students, and a high-tech crew of fraudsters.

Promoting development, reducing poverty, strengthening national institutions and good governance practices are essential traits which the country must imbibe to move forward. If we must get from here to there, the following are my recommendations: