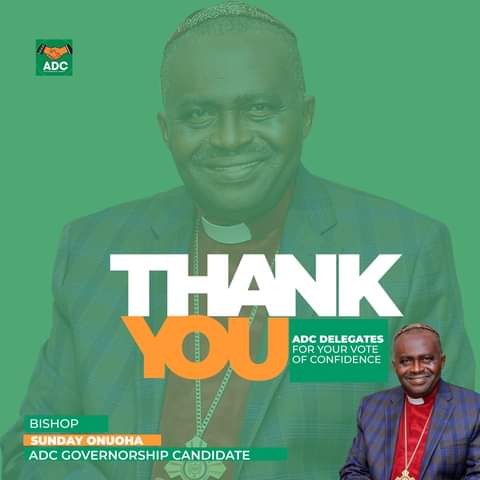 Speaking shortly after the election results declaration, the Abia ADC governorship flagbearer, Bishop Onuoha pointed out that governance is a serious business and must be approached as such.

Bishop Onuoha, who has been the President General, Item Development Association for 11 years, said since his 11 years on the saddle, there has not been issues of security lapses, revealing that he will replicate this feat if elected duly elected as the governor of Abia State.

The Methodist Bishop who recalled how he followed a delegation that demanded the release of Mazi Nnamdi Kanu last year November, still maintained that all they are asking from President Muhammadu Buhari , is the release of the IPOB leader so that Igbo leaders can work with him to bring peace in the region.

He assured of that through a digital economy he will champion, Abia State will be connected to the World.

Bishop Onuoha also recalled when Aba had a problem and how he contributed to the resolution that brought lasting peace between the Custom Officers and Aba traders.

The cleric also pledged to bring technological advancement in the State when given the mandate just as he added that he will ensure food for all by promoting good agricultural policies.

He congratulated his brother, Mr. Otisi Ebitu Ukiwe for the maturity exhibited while the delegates and stakeholders consultations lasted and expressed happiness that Abians have spoken through their votes, even as he promised to represent their interest.

Earlier in his speech, the State party Chairman, Mr Obinna Don Norman charged ADC delegates and members to be more committed to ensure the party secures a lot of positions after the general elections.

He said due to the calibre of the two Governorship aspirants: Bishop Sunday Onuoha and Mr Otisi Ebitu Ukiwe, the party has resolved to allow one of them contest for the Senatorial seat of Abia North as there will be one Governorship flag bearer.

Meanwhile, Mr. Robert Nkata Onuma, a party agent for Mr Otisi Ebitu Okiwe has described the Governorship primaries of the party as a sham primary election.

Nkata, who disclosed his displeasure while addressing a cross section of Journalists as the process was on-going, alleged that the accreditation of the guber primary election was faulty, as it fell short of INEC and party standards.

He alleged that delegates were sidelined in the process, noting also that in as much as he was not against inclusion of Persons With Disabilities, PWDs to participate in the primary election, but it was wrong for up to 75 percent of them to take part in ordinary primary election of the party.

Nkata said from findings available, the physically challenged persons that voted  came from a foundation, Bishop Onuoha oversees which caters for their well-being.

He insisted that the authentic delegates were sidetracked and disenfranchised in the election, alleging further that similar practice was the case in Lagos State as the party also sidetracked the potential delegates.

He further pointed out that they reject in its entirety, the outcome of the result.

His words, “The list of delegates used for the primary election is strange to us, we don’t know most names they were calling.

“Even though we are not against persons with disabilities participating in the election, having upto 75 percent of the delegates is questionable.

“We will not accept the result declared and we will challenge the outcome of this election in the lawcourt”.

On her part, a supposed delegate who pleaded anonymity, faulted the exercise, alleging that fictitious names were imported.

She contended that the physically challenged people that voted, were not registered party men and women.