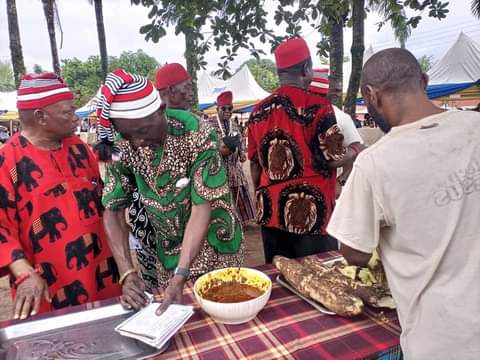 New Yam Festival is one of the traditional and cultural festivities Igbo people do not play with, and without performing this festival as group or individual, no full-fledged or mature man eats new yam in Igbo land.

This year’s Iri Ji Ajatanigu, held at the palace of the King, was unique as some illustrious sons and daughters, including one of the outstanding Igbo radio presenter with Flo 94.9 FM Umuahia, Mr. Nwachukwu Prosper Obioma (Elder Propropro) who was given the ‘Ekere na-akuru oha 1’ of Ajatanigu autonomous community Chieftaincy title.

Speaking during the festival, King Larry Ogbonnaya Agwu noted that Iri ji Ajatanigu portrayed the features of Igbo culture and described it as unique.

According to him, ‘Iri ji’ signifies arrival of new yam as well as a time to thank God for bountiful harvest.

King Larry Ogbonnaya Agwu who appreciated God for His benevolence towards the Ajatanigu autonomous community villagers/farmers, said it is not easy for one to toil, labour and God in his infinite mercy, grant him life to have a bountiful harvest.

According to them, the new yam festival which is conducted between August and September annually needs urgent attention of the state tourism Board, who should visit various communities and find their culture, examine and promote them for tourism.

While maintaining that, no peoples’ culture is bad, depending on the perception, they pointed out clearly that any culture that does not glorify God should be jettisoned.

Col. Akobundu celebrated with King Larry Ogbonnaya Agwu and the entire people of the community on their 2022 new yam festival.