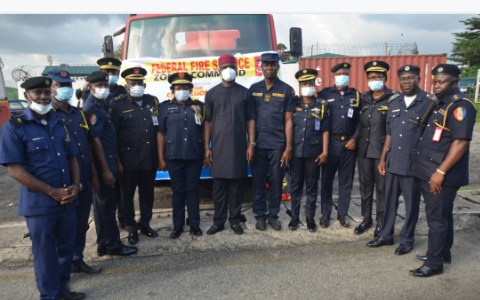 Speaking at the Government House, Umuahia during the delivery and commissioning of the Truck, Gov. Ikpeazu urged Abians to take ownership of the Water Tender Fire  Fighting Truck and other equipment that has been given to the State by protecting them from vandalization and miseuse; even as he warned against carelessness in setting of fire and bush burning as the harmattan season approaches.

The governor represented by his deputy, Sir Ude Oko Chukwu assured the Federal Fire Service and other Federal Government Agencies of the support and collaboration of his administration to enable them perform their duties and achieve the mandate given to them.

He noted that the Fire Fighting Truck will go a long way in controlling and stopping fire outbreak in the State and beyond.

The Governor who thanked the Federal Government and the Federal Fire Service for their commitment and concern in fighting and stopping fire outbreak also expressed confidence in the ability of the State Command to put the equipment into good use.

Earlier in her remarks, Assistant Controller General, ACG Achi Okidi Ijeoma in charge of Zone J Command Abia/Imo said that they are grateful to the Federal Government for approving the donation of the Water Tender Fire Fighting Truck to the State.

She passionately appealed that the truck be protected and put into good use.