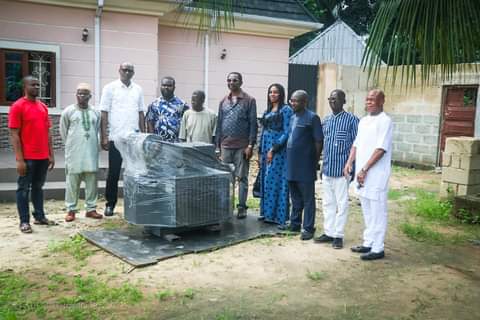 The Sole Administrator, Abia State oil producing Areas Development Commission, ASOPADEC, Rt. Hon. Emeka Stanley has reinterated the resolve of the Commission at sustaining her intervention activities and putting smiles on the faces of oil producing areas and Abia in general.

This he said, as the Commission donated two number 300 kva 11 transformers to Enyimba Automated Shoe Company Ward 11 Umukalike and Amuzu Umuonyengwa Ahaba Ward 5 all in Obingwa Local Government Area of the State, as part of the Commission’s intervention activities.

Stanley who said the donation was made in line with the directive of the State Governor, Dr Okezie Ikpeazu as part his policy towards enhancing productivity and providing adequate electricity supply to the rural commuinites, urged the beneficiaries of the transformers to make optimal use of them in realising the vision of the Governor in making Abia an emerging expoter of shoes.

Speaking also the Chairman of Obingwa Local Government Area,  Chief Ibe Nwoko represented by the Secretary to the local government, Chief Bestman Eruba commended the Governor for his good gestures to the people especially in encouraging entrepreneurship of indigenes of Aba and pointed out that the leadership of ASOPADEC under Chief Stanley has always favoured Obingwa people in the provision of social amenities.

In their remarks the Managing Director, Enyimba Automated Shoe Company (ENASCO) Chief Dominic Kito and the community leader of Amuzu Umuonyengwa Ahaba Ward 5 Obingwa LGA,Chief Omenazu Nwaobia thanked the State Governor, Dr Ikpeazu  and ASOPADEC for the donations and promised to make good use of the transformers.

Present at occasion were the Director of Administration, Mrs Nne Ifeyinwa Ralph, Director of Works Engineer Emeka Gberemako other Management staff of ASOPADEC and members of the communities, according to the release signed by the Commission’s Public Relations Officer, Iyke Onuegbu and made available to newsmen in Umuahia.