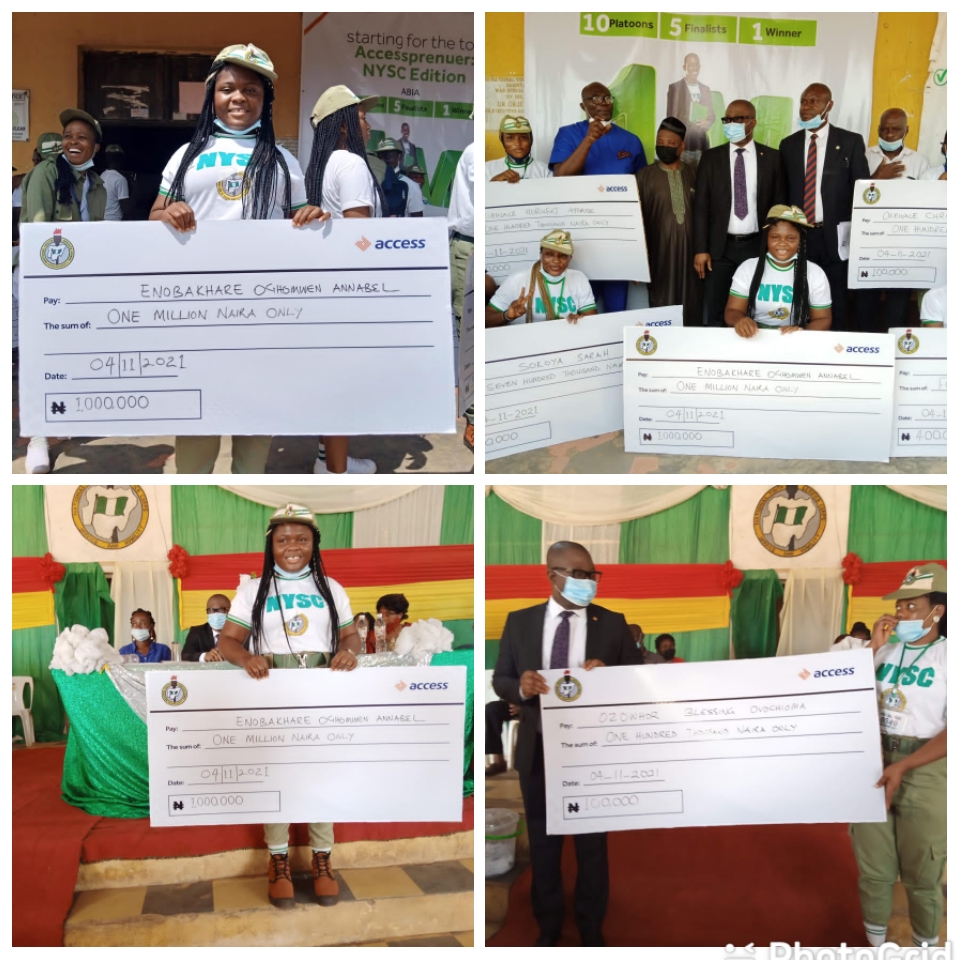 A total sum of N3,750,000.00, business start-up fund has been won by 10 corps members in Abia state orientation camp during the 2021 batch ‘C’ stream 1 orientation course in the state, in an Access Bank Nigeria PlC sponsored ‘Accessprenuer – All4One’ scheme programme.

The programme being part of the bank’s corporate social responsibility is aimed at empowering corps members with good bankable business proposals, by providing them start up capitals as well as mentorship, to help scale up their businesses.

During a one week Accessprenuer – All4One Scheme programme, according to a press release made available to newsmen in Umuahia by the Abia NYSC Public Relations Officer, Omaka Nnachi, 30 selected corps members who submitted their business proposals, were given the opportunity to pitch their written business proposal to a team of business experts, following a given format.

In the end 10 out of the 30 corps members, were selected to participate in the grand finale of the Accessprenuer programme, where 5, out of the selected 10 corps members were given the opportunity to orally present and defend their business ideas before a three man panel of judges, made up of, Mr Okey Odunze, an ICT media consultant and CEO Heirs Group, Barr. Henry Chinkere-Nwogu, lead council, Omega Jurns Chambers and Chairman Goshen Farms, and Mrs Christy Okwarah, an accountant.

In his opening remarks at the grand finale of the event held on Thursday 4th October 2021, the State Coordinator, NYSC Abia, Mr Jingi Denis appreciated the Access Bank PLC for partnering with NYSC  in her effort at making the corps members entrepreneurs and job creators.

He noted that access bank had in the time past built skills acquisition centers for NYSC in some States.

In his address the Access Bank PLC South East Regional Director, Mr Charles Oguibe said that the Accessprenuer initiative was organized to encourage and reward National Youth Service corps members who are young entrepreneurs.
He said that Access bank with her sustainability ethos was committed to improving the lives of the people and supporting the growth and development of her host communities, as such have partnered with the NYSC SAED to encourage young and emerging entrepreneurs.

According to the bank Director, “Our partnership with NYSC SAED would help facilitate the training and mentoring of Nigerian Youths in skills acquisition and entrepreneurship development for self reliant”.

He further noted that research have shown that lack of  access to finance has been the major reason for business failures, particularly start ups, which Access Bank has decided to solve by supporting young entrepreneurs with finance to fund their business ideas.