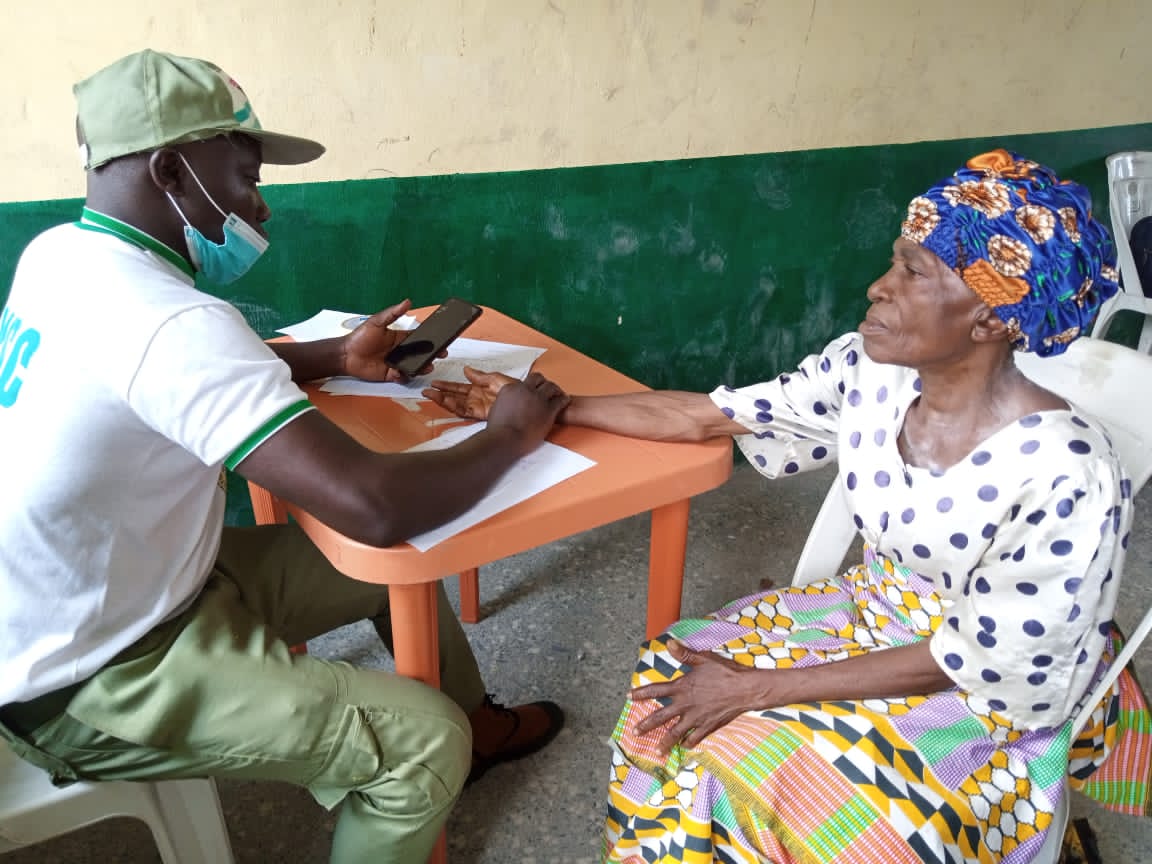 Beneficiaries of the Health initiative For Rural Dwellers, HIRD medical rhapsody of the NYSC have commended the Scheme for reaching out to the needy and indigents in society.

Some of the beneficiaries who include: Mrs Chisara Anosike Onuigbo and Mr Obioma Onyema spoke to a cross section of journalists at Umuochi -Umuohuru Okaiuga Nkwoegwu primary school, Umuahia, Abia State during a two-day free medical outreach, aimed at bringing quality healthcare to the poor masses.

Mrs Chisara Anosike Onuigbo who was diagnosed with arthritis and eye related issue described the exercise as more than “the medical outreaches people have been doing here” ; as the Corps Medical personnel engaged them through processes which include, blood pressure, check, screening, dispensing medications, adding, “If we had gone to hospital, we would have spent so much money to get all these done”.

Mr Obioma Onyema who was also diagnosed with Ulcer, Chest and Eye related issues thanked God for giving him the opportunity to partake in the medical programme, adding that people in the community would forever be grateful to the NYSC.

Other beneficiaries who also spoke with newsmen thanked the NYSC for remembering them with the medical outreach which they received free of charge.

Flagging off the exercise earlier, the NYSC Director General, Brig Gen Shuibu Ibrahim who was represented by Abia State coordinator, Mr Denis Jingi urged the people in rural areas to take advantage of the scheme’s nationwide free medical programmes to improve their health.

He noted that medical personnel like doctors, nurses, pharmacists and lab scientists serving in Abia State were in the community to administer free medical services to the beneficiaries.

The NYSC boss who stated that a similar health programme had been performed at Isiala Ngwa North LGA of the state, said the NYSC was in the business of building national unity and welfare of rural communities even as he charged privileged individuals in the society to sponsor the health programme.

In his speech, the member representing Umuahia North constituency in Abia State House of Assembly, Kelechi Onuzurike explained that the need to maintain sound health for his people necessitated his partnership with the NYSC, while promising to attract more dividends for his constituents.

Also in her address, the Director of NYSC, Southeast Area Office Enugu, Mrs Ngozi Nwatarali, represented by Favour Udonte Deputy Director, said, NYSC is out to improve the health of the rural people who cannot go to the hospitals because of financial constraints and other challenges, adding, “If you look at health situation of the country, you will appreciate what we are doing today”.

They expressed gratitude to God that many poor people would enjoy unhindered access to treatment and free drugs.

The President General Ohuhu Welfare Union worldwide, Sir Obi Aguocha in a brief speech commended the NYSC and the Umuahia North legislator, Kelechi Onuzurike for their interest in the health of his people and charged other privileged individuals to take a cue from them.

Free medical consultation, free medical laboratory as well as dispensing medications would will be offered from November 18 to 19, 2021 by corps medical personnel from the NYSC and drugs like anti-malarial, anti-typhoid, ulcer and eye drugs among others were also given out to patients after medical examinations.

The free medical outreach was attracted by member representing Umuahia North State constituency, Hon Kelechi Onuzurike while four groups, Famous Millers International, Hotel Helson, Beneph Associate and Pumeco, coordinated by Barr. Ebuka Igwe, procured over N500,000 worth of drugs which were distributed free of charge to patients during the programme.