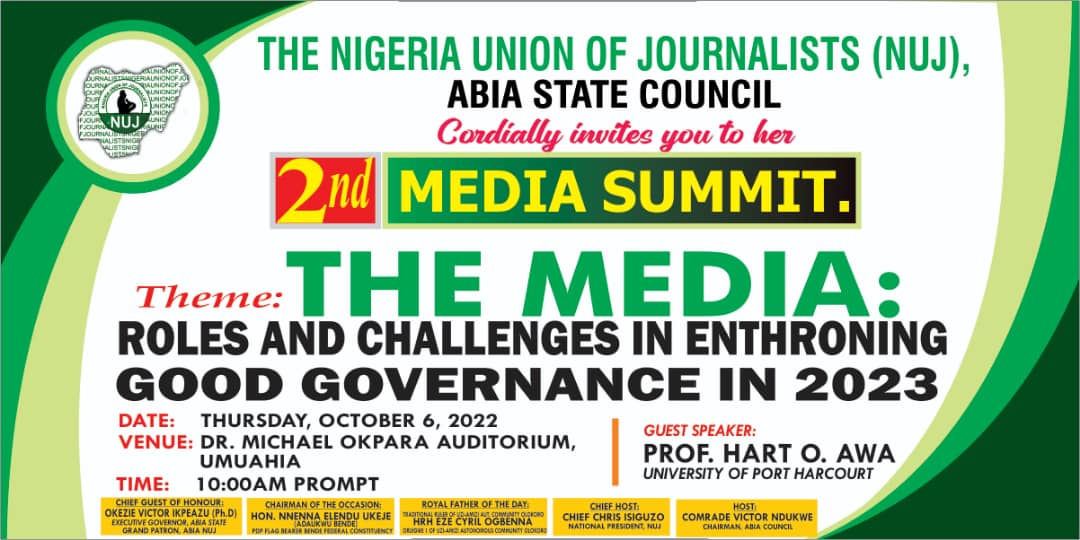 Practicing Journalists in Nigeria have been advised to shun monetary inducement and sensitize the voters appropriately on the importance of 2023 general elections in the country as bad governance has plunged many Nigerians into poverty and death.

A guest speaker at the just concluded Abia NUJ media summit in Umuahia with the theme, “The Role of the Media and Their Challenges Towards Good Governance” and Umuahia North State Constituency candidate under African Democratic Congress, ADC Rev. Dr. Blessed Uchechukwu Amalambu disclosed this in an exclusive interview after the event.

He noted that the role of the media during this electioneering time “is massive enlightenment campaign in the sense that the first thing is to re-orientate the people on the issue of money politics where the highest bidder takes it”.

“The event is a welcome development because, we need such information that will be educative and enlightening and also help the people to be properly guided, especially with the theme, “The Role of the Media and Their Challenges Towards Good Governance” which is the cry of everybody in Nigeria because of the bad governance we have these days which has brought Nigeria into hardship and suffering.

“The yearning of the people is who will be the savior that will change the narrative and right the wrongs? That is why I see the program as a welcome development and a commendable project.

“Now that everybody is crying for good governance and transparency, it is the duty of the media to pick information and hammer on these vital factors of good governance which is now ‘say no to corruption, thuggery, and ballot box snatching’. These are the works of the media: to make sure that people, both in the rural and urban areas are properly enlightened and educated so that their mindset will be properly corrected.

“Watch the trend of events in Nigeria now. There is a revolution going on, so that is the work of the media to make sure that it will pass such information even to the rural areas where people will key into the system of quest for good governance”, he said.

In terms of electioneering information, Amalambu who is also the Secretary, Pentecostal Federation of Nigeria, PFN Abia State chapter and the State Coordinator, National Anti-Volunteer Corps, NAVC/ICPC said the media has been trying a lot, noting however, that most of the time, monetary inducement has made some of the practitioners to go for falsified information “as there are a lot of sycophancy where people sing praises of sitting politicians that are not performing well and which is obviously clear that a particular politician is not doing well”.

“However, because some media practitioners are working for the government, you see them playing along, trying to praise a poor-performing government and that is the area I indict the media”, he further pointed out

He advised the media “now that everybody is crying for good governance, the media should also join in the cue to make sure that there is no falsified information, no matter the inducement. It is better you die doing the right thing than being compromised, hence plunging many into hardship. That little mistake, falsification of results or inducement can now lead to deaths like the present government in Nigeria is doing.

“So, people who didn’t pass the election, because the journalists, INEC and stakeholders in the process of electioneering campaign now join hands to enthrone the wrong people. Everybody is suffering it today and many have died”, he said.

In her speech, the Chairman of the occasion and the Peoples’ Democratic Party Candidate in the 2023 General Election for Bende Federal Constituency, Hon. Nnenna Ukeje called on media practitioners to strive towards enthroning good governance in Nigeria through their daily reportage.

She noted that for democracy to truly thrive in Nigeria, a free and independent media must be attained adding that the major role of the media is responsible reportage and holding public office holders accountable.

The former three time House of Representatives Member further explained that the media enthrones good governance by ensuring proper and right education of the people and called for an independent media that teaches citizens true responsibility in a democratic setting.

She said: “There can not be good governance without proper checks and balances. The media must rise up to play critical roles in other to build a better society as expected of them.

“As far as democracy is concerned, the independence of the media is attainable. When there is liberal democracy, there is freedom of the media”.

Ukeje however, identified poor renumeration of the media as a major reason for compromise and called for free press devoid of interference in the face of evolving democracies.

She insisted that the independence of the media should be given the utmost priority it deserves even as Nigeria strives in her democracy.

Ukeje while admitting that the rise of social media is a grave concern pointed out that social media gives rise to fake and unauthentic news.

Also in his speech, a media personality and former Secretary to the State Government Abia state, Elder Ralph Egbu said that the problem of Nigeria is not lack of vision but that of leadership failure.

Elder Egbu who was also a co-chairman of the occasion, chaired by Honourable Nnenna Elendu Ukeje, NewNationalstar award winner, said that the media should not relent in their efforts to enthrone good Leadership culture in Nigeria.

He encourage them to educate the public on the need to participate fully and make the populace know about the personalities who are campaigning for the public to vote for them in 2023 general Elections, so as to make people make informed choice in next year Elections.

The guest lecturer at the 2nd Media summit Abia state NUJ, Professor Hart Awa, Department of Marketing, University of Port Harcourt, said that communication and information create problems and equally solves problems and he said that it is the duty of Journalist to use it to solve problem of leadership in Nigeria.

He said that Nigeria rank very low in leadership guestion all over the world, that is while we are having the problems that is pulling the Nation down in all spheres of human endeavours.

In his opening address, the state Chairman Abia state NUJ, Comrade Victor Ndukwe, thanked the invitees for honouring the media summit and making it a success.

He said that the quest for development and good governace in a Democratic setting such as ours makes the issue of proper leadership recruitment, participatory democracy and the building of strong institutions rather than strong personalities should not be overlooked.

Awards were given to personalities such as a Rotarian and Abia Head of Service, Sir Onyii Wamah who has shown leadership to the Abia state workforce.