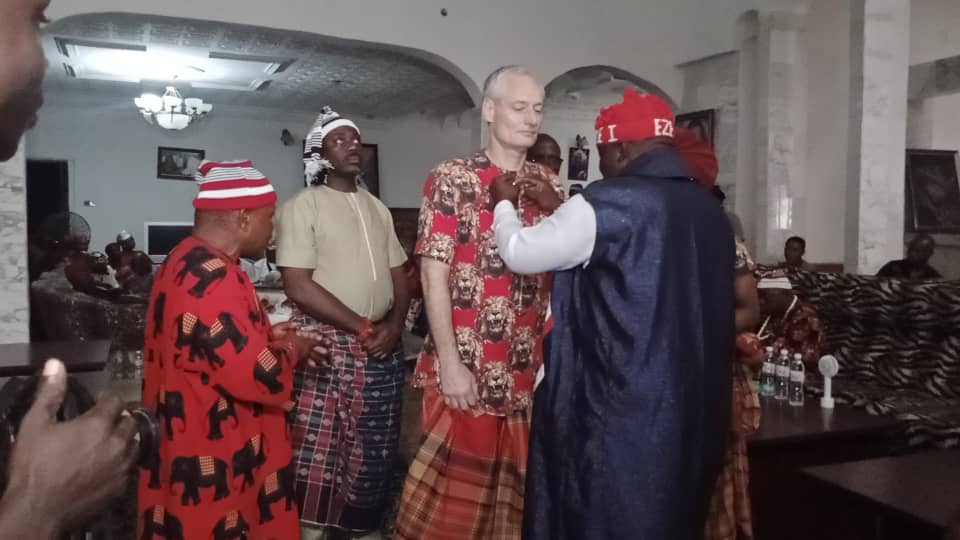 The traditional rulers of Oboro clan in Ikwuano L.G.A, of Abia State has conferred chieftaincy titles on their foreign sons in-laws as a result of their humility, kindness, love and passion for Igbo language, culture and tradit

Eze Agwu lauded Oboro daughters for the bold steps they took to marry husbands from different cultural background and assured their son in-laws of the support and prayers of the Oboro people.

The traditional ruler said, apart from providing a richer cultural experience for the next generation, cross marriage will capacitate the learning of new languages which will evoke a sense of closeness and intimacy between couples.

Responding after the chieftaincy installation, their son in-laws, Chief Thorsten Sprank from Germany and Chief Quadri Ahmed Omobolanle from the Yoruba land reeled out some of their humanitarian outreaches to the clan which include purchasing and donating football jerseys to the local footballers and promised to do more for their Oboro in-laws.

They appreciated the traditional rulers for the honour bestowed upon them and promised a long lasting union among them, as according to them, “in-laws are brothers to the family and society you marry from”.