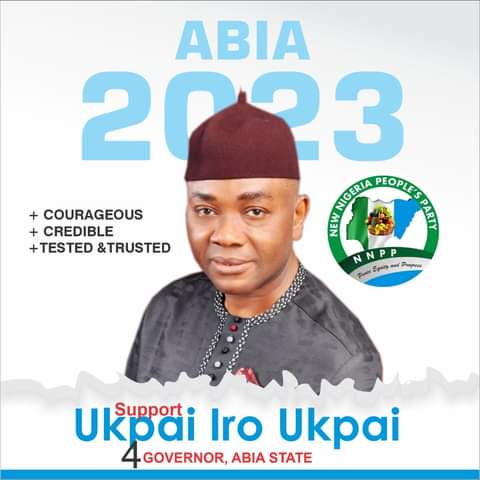 Abia 2023: I’m On A Redemption And Rescue Mission, Ukpai Declares

A front-line gubernatorial aspirant under the platform of the New Nigeria People’s Party, NNPP Dr. Ukpai Iro Ukpai has formally declared his ambition to contest for governorship seat of Abia State, come year 2023.

Speaking at the state party secretariat, Umuahia, Ukpai who is from Abia North senatorial district, said he is on a redemption and rescue mission in Abia State.

According to him, if duly elected by the Abia electorate, the anchors of his Government will be Redemption and Rescue pillars even as he assured that every Abian will be involved to be able to deliver on the target goal.

He highlighted technology as the driving force adding that Abia will become a technology city and will be the production capital of Africa.

His words, “We are telling Abians that they should cry no more. We are coming by the power of God with redemption for our state. We have all it take.

“We are recruiting competent people across board in Abia State. We are going to take back our state. We will take the state from bottom to top and out it back on its feet. We will employ human capacity, technology and make sure that the state will become an envy to other states in the country. We will create massive jobs, have wholesome security, secure education, health and food security. There will be rejoicing by the time we take over in 2023″.

While encouraging the supporters to get their Permanent Voter Cards to vote in NNPP in the forthcoming general elections, the NNPP Guber Aspirant urged the members to be committed to the course of redeeming the state come 2023.

Earlier, the Abia State NNPP chairman, Mr. Ogaranya Ifemeje described NNPP as a credible alternative for Abians, as the party is coming correct and improve on the perceived areas the government in power has not performed optimally.