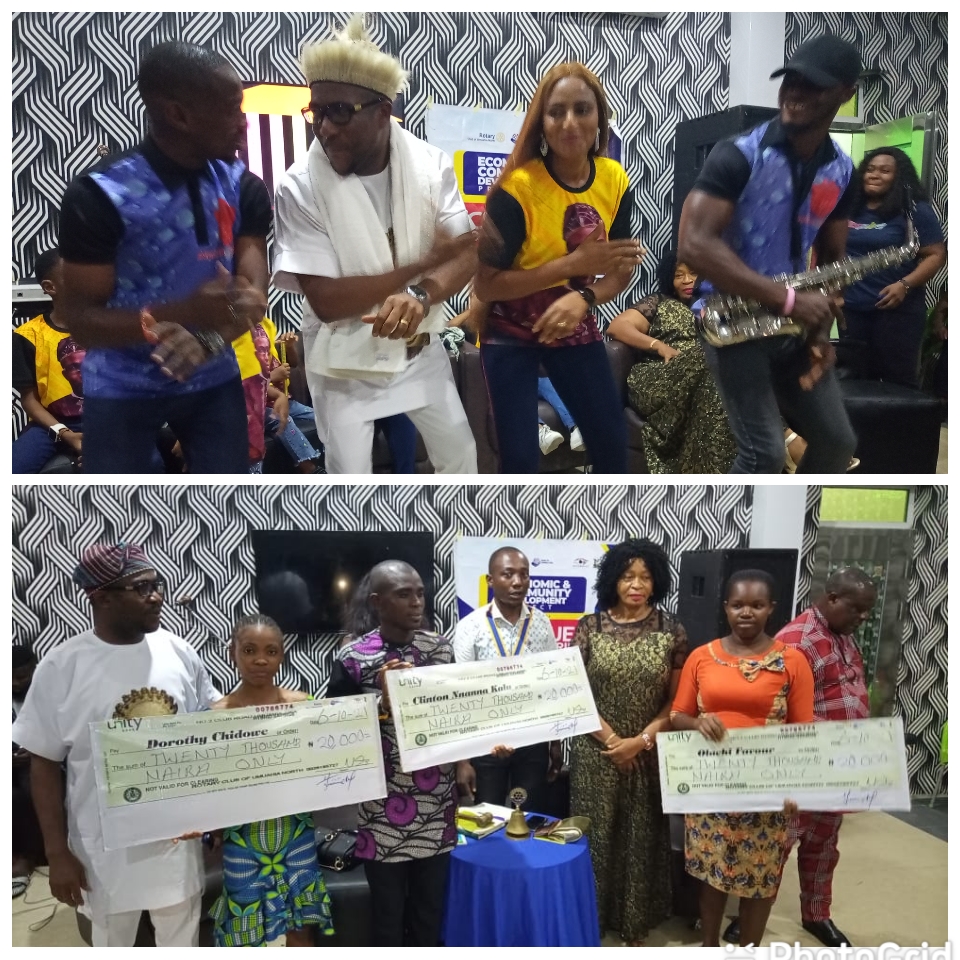 Beneficiaries of the Rotary Club of Umuahia North, District 9142 Interest Free Loan Scheme have lauded the Club on its efforts to encourage, promote and boost Small and Medium Scale Enterprises, SMEs in Abia State.

Interacting respectively with a cross section of Journalists shortly after they received a cheque of N20 thousand Naira each, the beneficiaries who include: Dorathy Chidowe; Clinton Nnanna Kalu and Oluchi Favour, promised not misuse the money but to use it judiciously to the best of their ability.

They pointed out that if other organizations should encourage petty traders and young entrepreneurs with interest free loans, the problems facing the society would be partly solved.

Handing over the cheques to the beneficiaries, during the event which the District Governor Elect, DGE Grace Okaro; PAG Chimdi Oluoha, among other Rotarians and Rotaractors attended, Rtn. Emeka Sopuruchi encouraged them to use the loan to improve the status of their business, pointing out that they are to refund the loan at the expiration of 6 months.

He also seized the opportunity to encourage members and the larger society to always celebrate their birthdays, as it calls for a special thanksgiving to God, owing to the uncertainties that have bedeviled the world in recent times.

Rtn. Sopuruchi appreciated God for the gift of life and vigor He graciously adorned AG Ekele Ochiabuto, District 9142 Assistant Governor zone 5, with and prayed God to sustain him with open doors and grace.
In his speech, the Assistant Governor zone 5, AG Ekele Ochiabuto who went down memory lane to recount God’s faithfulness to him, thanked God for His divine mercy upon his life, occupation and family and for attaining a new year (birthday) with strong health.

For the records, it was at the dawn of a fateful Tuesday, in the year of the Lord, that Nigerians nay the world over, heard the universe calling the name, Ekele Ochiabuto and as the solar air blew through the night, a mixture of golden and crystal light emanated through a hovering bright star in that early morning darkness accompanied by chirps of birds singing in unison and rhythmic symphony, it was the shout of joy and celebration as the cry of a child sounded, that we knew for sure that a golden boy has been introduced into world through the family of Mr. Patrick Ochiabuto Emenike of Okwuta Isieke Ibeku and his lovely wife Lovina Ulunma Ochiabuto (Nee Onwukwe, from Ossah Ibeku). It was clear that the destinies of many men rest on his shoulders. And his name: Ekeledirichukwu.

Ekele received his first sacrament (baptism) as a person born and raised in Catholic faith and was named COSMAS,  the name coined and christened by some of his friends as CEO (Cosmas Ekele Ochiabuto). Ekele, as he is popularly known, from cradle,has always embodied high intellectual capacity and academic prowess. From Primary to Secondary, and to Tertiary Educations, it has always been the same story of excellence, and like a golden fish that has no hiding place, his excellence will always throw him out no matter how much he tries to camouflage.

From day one, he became a rallying figure in his department in Abia State University. His academic ubiquitousness took him round the faculty and Like a transparent red gemstone with exceptionally valuable and glowing vitality, destined for success, he went on to become the departmental president of Urban and Regional Planning, and would win the award of the “Most Distinguished Graduating Student of the Department”.

Interestingly, when one thinks that his academic records will propel him to be one of the many town planners around of which he has a Masters degree, Ekele found himself in the banking hall. A  robust carrier that has spanned over a decade.

Show me someone who is diligent in his work, and I will show you Ekele Ochiabuto. Little wonder he has hobnobbed with kings and the nobles in his industry and has crisscrossed the Banking sector effortlessly like a fish in the river. Today, he is pitching his tent with Unity Bank Plc, having worked at other Banks like Access Bank and UBA. He is the branch Manager of the Bank, a post he has held for more than half a decade and accumulated for himself avalanche of encomiums and recognitions, thanks to his cerebral leadership.

He has provided robust and outstanding leadership in Unity Bank which has transferred a hitherto unknown bank in Umuahia, into a household name. He is the reigning Manager of the year in the bank, an award he has won back to back. He is a high flyer, a trailblazer, a pathfinder, a game-changer and above all, a servant Leader.

There is more to Ekeledirichukwu Ochiabuto than career pursuit and living just for himself. He is a humanitarian and philanthropist per excellence who believes in justice, progress, equity and fairness. He has adopted the “4 ways test” of Rotary as a guiding principle. He is very charitable and good hearted and in doing so, has touched many lives within and outside the state.

It is therefore not surprising when he became a Rotarian in 2017; since Rotary itself is a Humanitarian Organization.

Ekele, in his characteristic manner, joined Rotary with every sense of commitment and dedication. He is a multiple Paul Harris Fellow (PHF). He became the Club President of Rotary Club of Umuahia North in 2019 during the “Rotary Connect the World” year and distinguished himself so creditably and excellently. He went ahead to win the RI President’s Citation award.

Like the saying goes; ‘a reward for hard is more work’, Ekele was found worthy by the District Governor (2021/2022) Rtn. Okey Okonkwo, who appointed him as the Assistant Governor for Zone 5 – covering RC Umuahia Central, RC Umudike Central, RC Umuahia Government House, and RC Uzuakoli Provisional. As if that was not enough, The District Governor Elect, Rtn Grace Okaro, a smart lady herself, obviously knowing that the likes of Ekele is rare to find, has quickly put Ekele Ochiabuto in charge of the District Secretariat come 2022,2023. Today he is the District Secretary Designate.

Ekele, like Mahatma Gandhi, believes that, the simplest acts of kindness are by far more powerful than a thousand heads bowing in prayer. He has won many awards too numerous to mention here.

In 2017, he was Knighted by the Catholic Diocese of Umuahia in the Order of Knighthood of St. Mulumba and has gone ahead to become a second degree Knight.
Excellent as an accent, Rtn. Ekele Ochiabuto could be likened to the Golden Ruby Barberry – a handsome, compact shrub with colorful coral orange foliage that lasts into autumn, then turns a brilliant mix of bright orange to brick red, accented with gold margins.

He is happily married to his charming and adorable jewel, Nkiru. The marriage is blessed with 4 wonderful Children – Kosisochukwu, Munachimso, Chidumebi and Chikamara.

A golden ruby has been unveiled and a beautiful goal has been scored for Rotary Clubs in zone 5. Reason! Rotary Club, District 9142 simply scored a beautiful goal by electing a round peg into a round hole for a man who was and has been a strong advocate for fellowship and friendship. A game changer, broadminded and a firm believer in the overall good of every Rotarian and Rotaractors.

Rtn. Ochiabuto, a seasoned banker, successful human resource and economic development manager, is an organized man with organised family, patriotic, a quiet achiever, a good negotiator and motivator, liberal CEO, one who goes for others, caring, a team player, committed and courageous Rotarian and “Mother Theresa”, to the less privileged. By God’s special grace, in the nearest future, the likes of Ekele will come to the biggest stage and we all will be in for a new narrative.