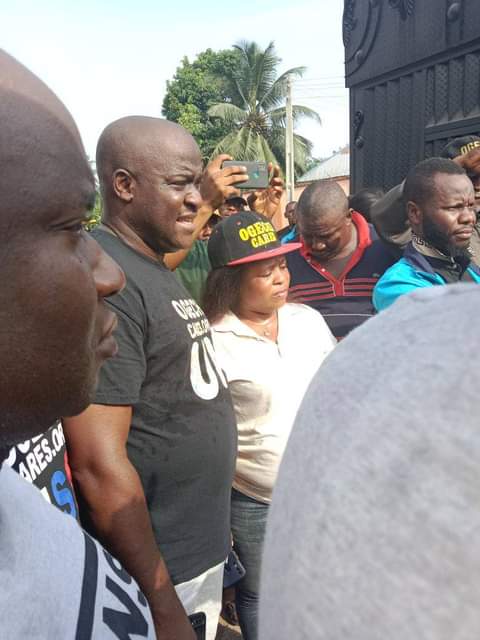 The over one thousand Olokoro youths made their position known when they paid a solidarity visit on Chief Uzosike at his Umunwanwa hometown.

They also resolved to purchase the People’s Democratic Party’s House of Assembly form for him and warned that should he decline from recontesting in the 2023 general elections, they will drag him to the lawcourt.

The convener of Olokoro Youth Political Front, Obi Pius and the Secretary, Comrade Emezue Ikechukwu in their respective speeches said that Chief Uzosike has shown capacity and proved to be effective in his representation.

They said that they were overwhelmed by his achievements and do not have any other alternative than to adopt him for a second term as he has what it takes to continue to represent the people.

Speaking also, Mr. Enyinnaya Izuogu and Hon. Odoemelam Ndubuisi affirmed that based on his track records in the State House of Assembly they desire him to return to the House as he has done wonderfully well.

Responding, the Member representing Umuahia South State Constituency, Chief Uzosike who accepted to run for second tenure in 2023, assured that his second tenure would focus more on the development of youths and women.

He appreciated the Olokoro youths for joining other groups in Umuahia South that had earlier endorsed him as their sole candidate for the House of Assembly 2023 elections.

He encouraged the youths to arm themselves with the registration of Permanent Voter Card, PVC as it is their negotiating power, even as he expressed optimism that Umuahia South would produce not less than 40,000 votes in the 2023 governorship election.

Contributing, the Deputy Chairman, Umuahia South L.G.A, Hon. (Mrs) Mercy Umesi eulogised Chief Uzosike for his effective representation which she said has affected many lives positively in Umuahia South LGA and called on all to support him and ensure the successful reelection of Chief Uzosike in 2023 State House of Assembly election.